A driving licence belonging to Leytonstone-born film director Sir Alfred Hitchcock has been auctioned in Las Vegas for $8,000 (£4,000) - twice what it was expected to fetch.

The Master of Suspense always insisted publicly that he was a non-motorist, so there was some surprise that he possessed the signed document.

But one of his biographers, Patrick McGilligan, wrote: "Though Hitchcock pooh-poohed driving, insisting to interviewers that he didn't even know how to drive, he did in fact chauffeur his daughter Patricia to school and to Sunday Mass."

The sale at Julien's Auctions of memorabilia owned by or featuring Hollywood notables attracted huge interest and the Hitchock sale was witnessed by several celebrities including former Baywatch star Pamela Anderson who sold one of her cars, a 2000 Dodge Viper, for around £30,000 at the same event.

The licence was snapped up by a mystery bidder in Asia.

Sir Alfred was born at 517 Leytonstone High Road above his father William's greengrocery and definitely spent the first eight years of his life there, from 1899 until 1907.

It has been claimed that his lifelong fondness for potatoes was developed in those days.

In his official biography - The Life of Alfred Hitchcock, The Dark Side Of Genius - author Donald Spoto said: "Meagre incomes and a bumper crop of potatoes in the early years of the (20th) century made that food the staple for local tables.

"The Hitchcocks, like many middle-class English families, depended on potatoes for a cheap, filling and nutritious diet.

"Everyone who ever dined with Alfred Hitchcock knew that (except that when he was on an unusually rigorous diet) potatoes accompanied every dinner.They were variously boiled, baked, double-baked and - in later years when he suffered some dental problems - mashed."

Spoto also claimed that after Sir Alfred's father died in 1914, he and his mother Emma returned to Leytonstone and remained there until the son married Alma Reville in 1926, but that is a mystery that has never been completely resolved.

Hitch himself told his biographer about his and his mother's experiences during a Zeppelin air raid on Leytonstone during the First World War.

After his success in Britain with films such as The 39 Steps, Sabotage and The Lady Vanishes, Hitchcock was lured to Hollywood where he went on to become one of the most famous directors in the world with classics like Psycho, North by Northwest and The Birds. He died in 1980.

For more about Hitchcock's life in Leytonstone and how it influenced his future career, see Alfred Hitchcock, From Leytonstone to Hollywood, by Nigel Sadler and Victoria Coxon, produced by the Vestry House Museum, Walthamstow 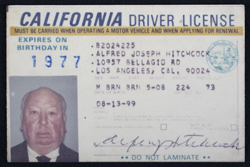