When the “ABC News Classics: Grace Kelly” DVD first appeared on Amazon.com, I assumed it would be a compilation of TV news articles about the life of Grace Kelly. Oh boy, did I assume wrong! 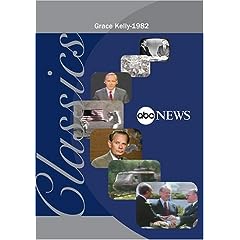 Unfortunately when I placed my pre-order, the product details on Amazon were sketchy and no running time was given. A quick Google search didn’t throw up any further details, so I thought “what the heck”.

When the DVD arrived yesterday, I was amazed to discover that $15 buys you a 19 minute news broadcast about Grace Kelly’s funeral from 1982 — that’s some footage of the coffin, an archive interview with Grace Kelly, and a 80’s newsrearder. Not exactly value for money and hardly a “classic”, unless the general quality of ABC News is on a par with Fox News?

Anyway, for anyone who is considering purchasing a DVD from the “ABC News Classics” range my advice would be don’t bother — you’ll probably find better things on YouTube and spend that $15 on something decent!!!