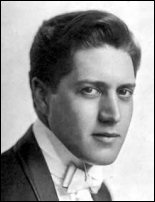 Carlyle Blackwell Snr was an American silent film actor and a minor director and producer.

He spent much of the 1920s in England, co-founding Piccadilly Pictures with Michael Balcon in 1926, and was the first actor to portray Bulldog Drummond in a film.

After producing Alfred Hitchcock's breakthrough film, The Lodger (1927), he was announced as the lead actor for a Hitchcock adaptation of John Buchan's novel Huntingtower.

After his final film in 1930, Blackwell turned to performing on stage in live theatre.