In motion pictures, an intertitle is a piece of filmed, printed text edited into the midst of (i.e. -inter) the photographed action, at various points, generally to convey character dialogue, or descriptive narrative material related to, but not necessarily covered by, the material photographed. Intertitles were a mainstay of silent films, once they became of sufficient length and detail to necessitate dialogue and/or narration to make sense of the enacted or documented events. The development of the soundtrack largely eliminated their utility, except as an occasional artistic device. 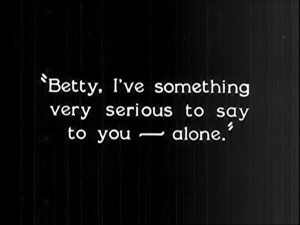 The term intertitle should not be confused with subtitle or main title.

The following full sets of intertitles from films directed by Hitchcock are available:

At the start of his career in motion pictures, Alfred Hitchcock designed the intertitles for the following films: