The pictures on the left are frames from Hitchcock's Torn Curtain (1966) and Topaz (1969). My corresponding photos from August 2004 are on the right. Two maps on which the locations are shown can be found at the bottom of the page.

A distant view of the city of Copenhagen. The City Hall with its prominent tower is visible in the background. Also shown are Andersens Boulevard, and the Tivoli, the famous playground (the latter is on the left and looks like a park). My photo was taken from the street level on Andersens Boulevard, instead of the tall office building where Hitchcock's camera had probably been placed. The location is shown as TC1 on map1.

The luxurious Hotel d'Angleterre on Kongens Nytorv (TC2 on map1):

The hotel lobby (where Hitchcock makes his cameo appearance) is not recognizable any more:

Copenhagen's famous canal, Nyhavn, just a few steps from Kongens Nytorv (TC3 on map1). Note the white, circle-shaped clock on the roof of one of the houses, that looks like a satellite antenna.

A display in the lobby of Hotel d'Angleterre shows pieces from the famous "Blue Fluted" series manufactured by the Royal Copenhagen porcelain factory. Today, at the factory's Welcome Centre and its shops, many similar pieces can be purchased (My photo shows a more recent design, featuring magnified versions of the old patterns, and called "Blue Fluted Mega").

The restaurant where Paul Newman and Julie Andrews quarrel is called "Nimb" and is inside the Tivoli (TC4 on map1).

An establishing shot of Copenhagen at the beginning of the film. The bridge in the foreground is Knippelsbro, the curved bridge is Christian IV's Bro (T1 on map1).

The Soviet embassy, where an elaborate camera movement shows Boris Kusenov and his family trying to leave the building without arousing suspicion (and, nevertheless, followed by three Soviet agents). Today the building is the actual Russian embassy, and is located at 5 Kristianiagade (T2 on map2). How Hitchcock got permission to film at this location is a mystery to me, since it must have been the real Soviet embassy at that time. The building still has an outside mirror attached to the wall (similar to the oval-shaped one shown in the opening scene, although it is rectangular now), but unfortunately I couldn't take a clear photo of it (as I, too, aroused suspicion in the security people, and was told not to photograph there).

Kristianiagade, the street where the Russian embassy is located, although it looks different than in the film, suggesting that perhaps a break in continuity has already begun (see next pictures).

According to the logic of the scene, this street corner should be very near Kristianiagade. We walked around for a few minutes, then stopped in front of a shop. Ilona suggested that I should go inside and inquire there. Quite remarkably, the lady in the shop, after looking at picture 15, exclaimed: "I know that place! It's the Astrup store! But it's quite far from here, at the corner of Dalgas Boulevard and Finsensvej." (see T3 on map2) She also identified the pharmacy ("Apotek") on one of the frames. It turned out that she had been born in that area! We immediately went there, and, sure enough, the corner still looks very similar to the one shown in the film (see photos below). Even the tree shown behind the white car in the film is still there. We celebrated this find by buying two bottles of beer in the very same Astrup food store that appears in the film. I'm aware that I was exceptionally lucky to find this place so easily. It represents the nicest type of Hitchcock location that I can imagine, one that is so (seemingly) unimportant, so much out of sight, and coming from such an unpopular film that possibly no-one has ever attempted to locate or visit it before.

Kusenov and his family try to outwit the Soviet agents by taking a guided tour at the Royal Copenhagen porcelain factory. The factory building shown in Topaz is located at 9 Søndre Fasanvej (T5 on map2). The porcelain factory moved to another location just a couple of months ago, but there is still a Welcome Centre at the old building, where one can watch videos of the manufacturing process, and see (in real life) beautiful porcelain pieces being hand-painted. The full tour taken by the Kusenovs no longer exists. The old factory building is being turned into fashionable apartments. The wall where the old entrance once was is now protected by a glass wall (the windows can still be identified):

Although the manufacturing process cannot be followed in such detail as in the guided tour shown in the film, the shop near the Welcome Centre has a similar feeling as the factory interior in the film. In the Welcome Centre, one can see many half-finished pieces, demonstrating different stages in the production, and we also saw a painter showing very cordially her amazing skills. She joined the factory in February 1969 (just after the filming of Topaz) and remembered how "the other girls" used to tell stories about Hitchcock and the filming.

Kusenov's point-of-view, showing the backyard of the porcelain factory (still T5 on map2). The street in the background is Smallegade. Most of the buildings are clearly identifiable today. Sadly, I'm not sure how much of this will survive, considering the construction works being done there.

The American embassy (where the John Forsythe character works) is at 24 Dag Hammarskjöld Allé, just a few steps from the Russian embassy. Here, the pressure on me not to photograph was even greater, hence the different angle on my picture.

The busy street on which the escape of the Kusenovs is actually carried out by the Americans is the Vesterbrogade, not far from Tivoli and City Hall Square (T6 on map1). In some frames City Hall and the Palace Hotel can be seen in the background. Most of the buildings still exist, although the signs on the façades are usually different now (a notable exception is the Vesterport sign behind John Forsythe).

Finally, the two maps of Copenhagen, showing the locations described above: 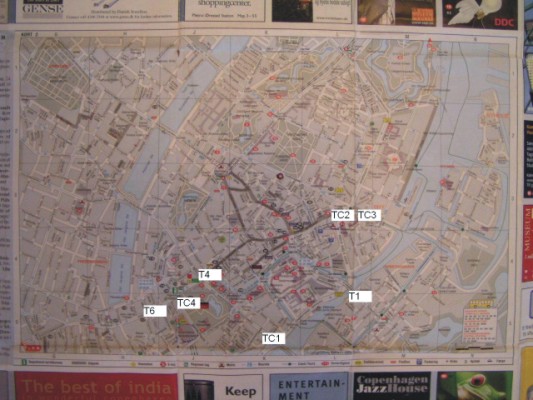 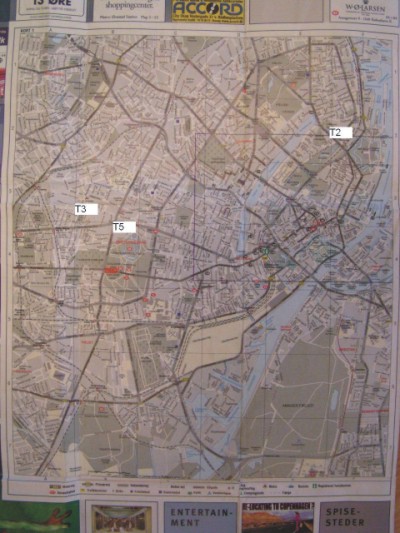