The pictures on the left are frames from Hitchcock's North by Northwest (1959). My corresponding photos from September and October 2003 are on the right.

The corner of 42nd Street and Fifth Avenue in New York City, with the NY Public Library on the right:

The West Balcony in the main concourse of Grand Central Station:

At the corner of 57th Street and Fifth Avenue. Tiffany's is on the left (that's where the ladies have probably been shopping), and Bergdorf-Goodman's is on the right:

The corner of 42nd Street and Fifth Avenue:

The corner of Madison Avenue and 60th Street:

59th Street, in front of The Plaza Hotel. Central Park is visible on the right.

Entrance of The Plaza Hotel:

The lobby and the corridor leading to the Oak Bar:

The Oak Bar. Note that the left part of the painting behind Thornhill's friends is missing in the film, suggesting perhaps that the bar in the film was a studio set, and a not entirely faithful reconstruction of the original.

Entrance of the Oak Bar and a side exit of the hotel:

The side exit of the hotel, with Central Park in the background:

The corner of 59th Street and Fifth Avenue:

Entrance of Old Westbury Gardens, Westbury, Long Island. This beautiful place (which was Lester Townsend's mansion in the film) belongs to the Phibbs family, and is open to the public.

The lobby of The Plaza Hotel, now without telephones:

The main lobby with the elevators:

This is now The Delegates' Dining Room in the UN Building. It is on the 2nd floor, and unfortunately not open to the public. The bridge seen in the background is Queensboro Bridge (seen on my photo, taken from a different location inside the UN Building).

The fountain in front of the UN Building. Note the interesting discrepancies between the frame captured from a DVD version of "North By Northwest" (first image below) and the one captured from a VHS version (third image below). In the DVD version Thornhill is running towards the taxi on the diagonal path seen on top of the frame, but on the VHS version he is running out of the tall building on the right. Also, the location of the first taxi is different in the two frames. I don't know which one corresponds to the original 35mm print, and why the scene had to be tampered with for the other version. In any case, the diagonal path doesn't exist now:

Grand Central Station. Note that the phone booths are now missing. "Window 15", where Thornhill wants to buy a ticket, is now window 7. The track Thorhill is walking to in the last frame shown below is Track 34 now.

The Winter Garden theater on Broadway. This is the theater (mentioned in the film, but never shown) to which Thornhill had tickets, the day he was kidnapped by Vandamm's men: 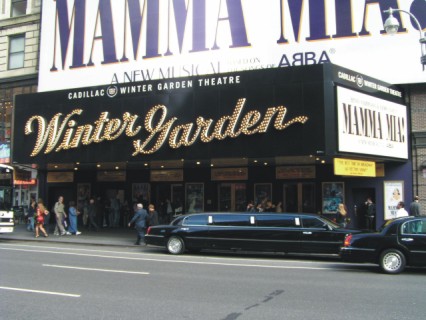