Hmm. Consider that last item from last week about how '[a]rtists enjoy seeing themselves as raffish outsiders, people of dubious morality'. I'd say that goes for audiences, too, up to a point - approximately just past the half-way point of a film, to be more precise. I listened this week to film historian Bruce Eder's generally solid commentary on The Lady Vanishes - full of good insights like how the carriage sets were rocked to subtly suggest the train's movement - but felt that he was unnecessarily prim early on about the adulterous relationship of the barrister Todhunter (Cecil Parker) and 'Mrs Todhunter' (Linden Travers). The fact is that audiences almost want a bit of the illicit and the offbeat in the early stages of a screenplay, and are prepared to suspend moral scruples in the interests of indulging curiosity and what I call the amoral nature of the Will in each of us. Surely both Rope and Rear Window offer classic Hitchcockian cases of what I am suggesting? In Rope, the film actually begins by making us privy to a heinous murder but far from being merely repelled by this, we watch with curiosity to learn what drove the two murderers to commit their crime - can they possibly 'justify' it? - and what slips they may make that will lead to their undoing. Even then, it isn't clear that we have merely suspended normal morality. About half way through the film, as the serving-lady Mrs Wilson (Edith Evanson) begins to clear the table-cloth from the chest containing the body, we realise with a gasp that maybe the murderers are now about to be found out - and a part of us involuntarily wants to warn them, or is anyway relieved when suddenly Brandon (John Dall) appears in frame and tells Mrs Wilson not to bother about the clearing-up. So do you see why I felt that Bruce Eder sounded over-proper about the Todhunter relationship in his TLV commentary? It isn't what audiences are caring about at this stage of the film. (We are also gratified by some good-natured 'daring' shots and hints in the early hotel scenes. Not mentioned by Eder: a glimpse of Margaret Lockwood's panties; the gag that American audiences don't seem to understand, involving Charters and Caldicott averting their eyes when the maid dives under the bed and they think she is retrieving a chamber-pot but which turns out to be just a hat-box; and the hint that Gilbert (Michael Redgrave) may have been a 'kept man' - a lady had paid for his room at the inn ...) Even so, Eder does redeem the situation when, citing the Todhunters, he speaks of how, before the end, the film will challenge its English characters (and by implication, the audience) not to 'hulker down' and withdraw from reality but to stand up and be counted. This is to recognise how the film has changed gears and invoked a 'higher morality' - which I think is very Hitchcockian of it. There's an anticipation here of, say, Saboteur and Lifeboat, I think. Certainly Todhunter will be condemned by the film not for adultery, nor even for his craven concern earlier not to jeopardise his reputation as a judge, but for his seeking 'appeasement' (cf Neville Chamberlain at Munich) with the enemy whose true nature he still doesn't recognise. I am reminded of something that Hitchcock said about The Birds: that it initially shows people who are complacent - 'unaware that catastrophe surrounds us all' - but 'that when catastrophe does come, when people rise to the occasion, they are [generally] all right'. Another good point by Eder was how the business of Miss Froy's name on the window, which suddenly vanishes (like the lady herself!), is topped by the business with the label from her distinctive brand of 'Harriman's Herbal Tea'. Hitchcock holds back the pay-off on this motif until a deliberately quiet moment when, after Gilbert has wandered away from Iris into the train corridor, only half-believing her story that Miss Froy was on the train, he sees a kitchen-hand throw out the train's garbage (see frame-capture below) - and there on the outside of the window, for a moment, is the tell-tale label. This moment reminded me of at least three earlier moments in other Hitchcock films. For example, the shot of the kitchen-hand shows him to be totally unaware and nonchalent about what he is doing (throwing out garbage into a passing field!), which seems to combine the unawareness of the cymbal-player at the Albert Hall climax of The Man Who Knew Too Much and the indifference of Hitchcock's cameo in The 39 Steps where we see him play a litterbug who nonchalently tosses a candy wrapper onto the footpath! (My point is the clever use of counterpoint in these moments.) But most of all I was reminded of another moment from The 39 Steps. Suddenly Gilbert in TLV is absolutely won over to Iris's point of view, to the truth of her story, just as in The 39 Steps, upstairs at the inn, Pamela (Madeleine Carroll) overhears a conversation downstairs and suddenly all of her remaining hostility to Hannay (Robert Donat), asleep nearby, melts away and she absolutely believes his story about spies. Hitchcock nearly always knew exactly what he was doing, and this finely-judged moment in TLV is exemplary. 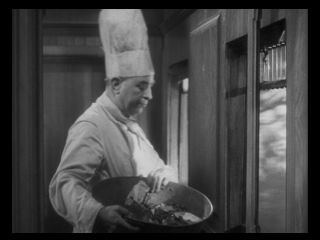