Apologies in advance tonight if the following shows signs of haste - my weekend has got away from me! I recently looked at the newly-released DVD print of Hitchcock's first film The Pleasure Garden (1925), largely shot in Munich. The film is now available (Region 2) from Network as part of its British Hitchcock package consisting of ten films. This newly-released print of The Pleasure Garden is tinted and is the Raymond Rohauer print - which is not exactly the same as the British NFTA print elaborately described in Jane Sloan's 'Alfred Hitchcock: a filmography and bibliography' (1995). In particular, the Rohauer print has had the beautiful Lake Como honeymoon sequence severely cut - see below - though in compensation it does contain additional footage at the end in which the heroine Patsy (Virginia Valli), after many tribulations, returns to London with a new prospective husband Hugh (John Stuart). (Incidentally, a reason I looked at The Pleasure Garden this week was to see if I could spot Hollywood star Nita Naldi - contracted to appear in Hitchcock's next film The Mountain Eagle - playing the Native Girl, as is sometimes said to be the case. I have a DVD of Naldi's first film, John S. Robertson's Dr Jekyll and Mr Hyde (1920), in which she appears with John Barrymore. It's likely that Hitchcock would have watched her in that film - he admired Robertson's work - and also he may have seen her in Cecil B. DeMille's The Ten Commandments (1924). There is a still of Nita Naldi on the IMDb. All things considered, I think it is Naldi in The Pleasure Garden. The still on the IMDb looks particularly like the moon-faced Native Girl we see in some shots.) So, why are there variant prints of The Pleasure Garden? I once speculated about this in the hardcopy 'The MacGuffin', #29, January 2004, and found a clue in something that Pat Hitchcock reported in her book 'Alma Hitchcock: The Woman Behind the Man' (2003). There she wrote: 'Following the end of filming [of The Pleasure Garden], my parents had their first - and rare - disagreement. It had to do with the editing of the picture, which my mother supervised; my father said it was "flashy"! What I believe he meant was that the scenes were more edited than usual. With her editing skills, Alma had made the film more dynamic but might have overdone it a bit.' (Pat Hitchcock and Laurent Bouzereau, p. 42) 'Accordingly', I wrote in 'The MacGuffin', 'I wonder whether the film wasn't released in two versions, with Alma's cut perhaps approximating the Rohauer print and Hitchcock's version being represented by the statelier NFTA print [which, by the way, pretty well matches a third extant print, held at the Southern Methodist University in Dallas, Texas]. The latter sacrifices some comedy business with Mr and Mrs Sidey [Patsy's landlords], for example, but gives more footage to the audition scenes in The Pleasure Garden theatre and considerably extends the Lake Como sequence.' ('The MacGuffin' #29, p. 17) For the record, the full Lake Como sequence (as seen in the NFTA print) includes some charming footage in which a young man serenades his girlfriend in a boat drifting on the lake in the moonlight, while Patsy and her husband Levett (Miles Mander), who will later betray Patsy with the Native Girl, wander together at the lake's edge. But Hitchcock perhaps isn't being entirely free of irony, even here. Eventually we realise that Levett may have paid for the boat to be there, part of the bridal package which also includes the hire of the vast bridal suite itself in a large villa. And next day, to further sober us up, Hitchcock works in a shot of the same boat (or its twin), now moored and skeletal-looking. (He would use a similar night/day contrast in Downhill [1927] to characterise a Paris dance hall: first alluring and offering romance, then merely drab and deserted.) Something else I noticed when watching the film this week is a detail early in the film that is quite subtle. By means of some elaborate cross-cutting early in the film between Jill taking tea at the Sideys' house and her ambitious friend Jill (Carmelita Geraghty) somewhere across town 'trying out' a new costume with the appreciative (and lecherous) theatre manager Hamilton (George Snell), Hitchcock prepares us to see Jill supplant Patsy as the theatre's featured chorine. At the beginning of the film, we had watched Patsy in that role. Now the film cuts to Jill wearing her distinctive new costume - but this time she is wearing it onstage, while Patsy (in blonde wig) has been relegated to the chorus line behind her. (See frame-capture below.) 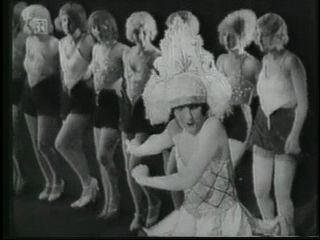