Quite a few scholars think that Shakespeare was a Catholic, which is interesting in the context of the topic of 'objectivity' (primarily Hitchcock's) I've been discussing here. The poet Keats didn't refer to Shakespeare's possible Catholicism, but he did use Shakespeare as his supreme example of 'negative capability', by which Keats meant the capacity to enter imaginatively into the very being of a fellow-creature. Showing his own objectivity, Keats contrasted Shakespeare with some other outstanding poets, such as Milton and Wordsworth, whom he said exemplified 'the egotistical sublime', the opposite of 'negative capability'. Arguably, then, Shakespeare was and remains the most objective English poet and dramatist, precisely because of his capacity to enter sympathetically into his many characters and show them from the inside, so to speak. ('Shakespeare', said Walter Murdoch, 'was a sort of universal counsel for the defence'.) Which brings me to why I recently sought out a DVD of John Patrick Shanley's Doubt (2008), starring Merryl Streep and Philip Seymour Hoffman (see frame-capture below), for what it might tell me about Catholicism's capacity to be open-minded (roughly, objective) and what doubt has to do with the matter. The Catholic Hitchcock made a film called Shadow of a Doubt and, even more to the point, I (for one) have increasingly detected in his films a paradigm of ambiguity and paradox that actually helps make the films more life-like and, well, more fair, than many. I'll return to this. Now, Shanley's Doubt, adapted by him from his Pulitzer Prize-winning play, is set in a Catholic primary school in the Bronx run by the Sisters of Charity and is about, you could say, a power-struggle between the principal, Sister Aloysius (Streep), and a priest, Father Flynn (Hoffman), who preaches in the adjoining church and takes the school's boys for gym classes. The time is the 1960s when winds of change are blowing through the Church after Vatican II. The school has lately taken in its only black student, a boy named Donald, who has had problems at his previous school. But Sister Aloysius, something of an old biddy, begins to suspect that the popular Father Flynn is paying undue attention to Donald. In an outstanding scene - one of several - Sister Aloysius summons the boy's mother (Viola Davis) and is startled to learn that Donald is probably homosexual and that his father regularly beats him; the mother actually says, 'So what if Father Flynn has befriended my son in the way you suggest, isn't that better than the boy having no close friends and a father who detests him?' Wow! Bold writing! But the film never confirms Sister Aloysius's suspicions that Father Flynn may be a child-molester - suspicions which may be all in her mind - and instead, admirably, concentrates on the very issue of doubt itself and how human goodness is put at risk if doubt isn't allowed its place in human affairs. (Note. Keats defined 'negative capability' as the condition 'when man is capable of being in uncertainties, Mysteries, doubts, without any irritable reaching after fact & reason'.) Australian film critic Father Peter Malone wrote on the Web: 'The confrontations between Sister Aloysius and Fr Flynn become quite desperate for [the latter] when he realises that the nun is so certain and dominating and has taken investigations into her own hands rather than respecting him as a person, let alone a priest. We see the conflict between the old authoritarian style and the new, more personable style of interactions.' That's true as far as it goes but it still simplifies how the film actually works. At every turn, we are given evidence for and against Sister Aloysius's position, i.e., both for and against her authoritarian style generally and for and against the possibility that her specific allegation against Father Flynn is accurate. (She does indeed confront him with her allegation in another powerful scene or two.) Also, we are shown signs that priests still uphold a patriarchal self-serving cameraderie which may or may not extend to protecting their own, even in cases of paederasty, as history suggests has been the case. Understandably, Ella Taylor's review of Doubt in 'Village Voice' interprets the film as showing how 'there are limits to an open mind' - something, to be truthful, I had never thought was possible, but now I'm having doubts! But right to the end, ambiguity remains. When the priest resigns his position, is it because he is guilty as charged, or is it, as I've seen suggested, that he realises that Sister Aloysius is so set against him that she would stop at nothing, and would drag the boy Donald to a public trial if necessary, which Father Flynn, in his humanity, wishes to spare the boy? Now, I'm not aware that John Shanley has any special liking for Alfred Hitchcock's films - he doesn't seem to refer to Hitchcock in interviews - but I do suggest that the foregoing description of Doubt is quite Hitchcockian. Next time, therefore, I'll discuss Suspicion, Shadow of a Doubt, and Rope in this context. 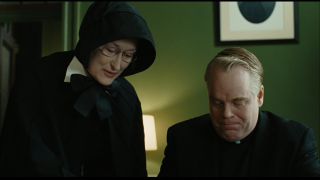