As noted last time, Torn Curtain draws on a 'suffer in silence' motif that was once the staple of many films and stage melodramas (such as Madame X and the Australian film The Silence of Dean Maitland - both filmed more than once, which may say something). It is, besides, a very 'human' motif - that is, it provides an example of the Symbolist content that informs so many Hitchcock films. At some level, we all 'suffer in silence' - and Donald Spoto's biography of Hitchcock shows that the director himself was such a sufferer. Also, the motif provides yet another instance of how Hitchcock's work generally is 'Schopenhauerian' (Schopenhauer taught that the cosmic Will = suffering), with Torn Curtain a particularly analytical example of the Reality (Will) versus Appearance (Representation) theme that runs through Hitchcock's work (see end of entry for October 27, above). Not Thomas Aquinas, not David Hume, not Slavoj Žižek, but Arthur Schopenhauer is the single philosopher who has the most light to throw on the films of Hitchcock - though all of the above are relevant to those films, undoubtedly. But now let's get practical! Watching the Ben Afleck political thriller Argo this week, I enjoyed its pacing and humour and suspenseful realism (re-creating events in Iran in 1979), but found it one-dimensional. When all was said and done, and the rah-rahing was over, and the literally flag-waving last shot was faded from the screen, it left me unsatisfied. (To a correspondent I wrote, 'Several Hitchcock films, by contrast, raise the subject of patriotism in order to show how it - patriotism - conceals or encourages affronts to individual life or well-being. Think of Alicia's line in Notorious, "Patriotism. That word gives me a pain". Hitchcock was always a thinker!') Though Hitchcock admitted that Torn Curtain ended up a film of compromises, its basic compassion for humanity is evident. As I've analysed at length before, the very titles sequence - see frame-capture below - is about precisely Will versus Representation. Forget the Laurent Bouzereau piece of trivia that the flame on the left of screen is that of a (Saturn) rocket being tested. The important thing is that the image of fire is like that of the Sun, in other words, life itself, or singular Will. Meanwhile, on the right of screen, seemingly struggling to emerge through swirling grey mist, we see a succession of faces, many of them clearly in pain - human life as multitudinous Representation, endless suffering. Such imagery of Fire and Ice (as Spoto calls it) will recur throughout the film, accruing rich meaning. (Nothing like it in Argo, note.) Initially, the sequence may stand as evoking the birth of the cosmos. As Camille Paglia writes in 'Sexual Personae' (1990): 'Mythology begins with cosmogony, the creation of the world. Somehow out of the chaos of matter comes order. The plenum, a soupy fulness, divides itself into objects and beings.' Which is exactly what happens during the Torn Curtain titles sequence (and whose significance Bouzereau misses). But during the film, the Fire and Ice imagery becomes pronounced in its own right, culminating in the performance of Tchaikovsky's symphonic poem 'Francesca da Rimini' ('staged incongruously as a ballet', notes Wikipedia), with the flames of Hell palpably present onstage. Equally, rather like a ballet itself, the film constantly choreographs the struggles of its characters as strivings and desperate reachings-out for help (as during the audience panic in the theatre). A long analysis of Torn Curtain in 'The MacGuffin' specifically noted how one scene is essentially 'about' Will - the murder of Gromek - and another scene specifically 'about' Representation (call it people-power), namely, the scene with the two buses. More about that next time. But I began by referring to the 'suffering in silence' motif. What is masterly is how Hitchcock gives both Sarah and Michael such suffering - and them re-unites them in the hillock scene (which is weak photographically, but otherwise splendidly ambiguous - for the couple is not out of the woods yet, nor have they awakened to the suffering of others which is all around them ...). In turn, the motif is linked to another type of silence - extreme reticence - as when Sarah, questioned at the faculty interrogation, is silent for fully thirty seconds and then insists, 'I have nothing to say!' Such stylistics make Torn Curtain a film ahead of its time - as one of our 'advanced' Hitchcock study group insists - or at least far more experimental than is often noted. (I'm not forgetting its experiments with indirect lighting, as reported in 'American Cinematographer'.) To be continued. 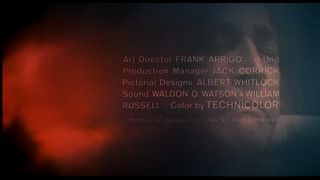