A couple of things spur me to discuss the Absurd in Hitchcock. First, Peter Bradshaw in 'The Guardian' recently suggested that 'the nearest comparison to Hitchcock's The Trouble With Harry is probably with Eugene Ionesco's play "Amédée, or How to Get Rid of It" (written in 1954, the same year) about a playwright and switchboard operator who have to deal with a dead body in their apartment that is continually growing'. Second, Michael Gould in the revised version of his 'Surrealism and the Cinema' (see last week) suggests that in Hitchcock's North by Northwest (1959) 'a procession of mishaps culminates in a scene of Ionesco-like absurdity, with Thornhill standing at the edge of a highway by a cornfield ... being targeted by a low-flying crop-dusting plane' (p. 124). (For my part, I have previously compared the crop-dusting scene - especially the humorous moment when Thornhill and a taciturn farmer confront each other - with Beckett's 'Waiting for Godot', and cited Hitchcock's own remark at the time, 'The fact is, I practise absurdity quite religiously'.) There can be little doubt that the Theatre of the Absurd would have appealed to (an aspect of) Hitchcock's sensibility. Authority on The Absurd, Martin Esslin, notes that one of its playwrights, Jean Genet (no less), 'regards his plays as attempts at re-capturing the ritual element in the Mass itself' (Introduction to Penguin Plays edition of 'Amédée', et al., p. 16) - though I shan't go into the ramifications of that just now. Here I want to talk mainly about the plays of Ionesco in relation to the films of Hitchcock, bearing in mind something that Ionesco once wrote: 'All the plays that have ever been written, from ancient Greece to the present day, have never been anything but thrillers ...' ('Victims of Duty', 1953). All plays involve some sort of investigation, suggests Ionesco, which surely goes for Hitchcock's films too. I also note that both Beckett and Ionesco read the philosopher Schopenhauer, an influence on the Symbolist and later art movements (and thus on Hitchcock). Even more, Ionesco was influenced by another pessimistic thinker, Plotinus, whom the Symbolists often turned to. And at one point, still in pessimistic vein, Ionesco wrote his own version of Shakespeare's 'Macbeth' ('Macbeth', 1972), because he felt an affinity with Shakespeare's lines about how the world is 'full of sound and fury ... signifying nothing'. Perhaps there's a hint of such a position in Sam Marlowe's remark in The Trouble With Harry, about his disdain for 'city people - people with hats on' (and even more, of course, in Psycho where poor Norman Bates can only conclude, 'We're all in our private traps ... and never budge an inch'). I do appreciate Peter Bradshaw's comparing Harry to 'Amédée' but now that I have read the latter, I think that the comparison only works up to a point. After all, Harry is at one level the 'nice little pastorale' that Hitchcock called it (with echoes of the deceptively sunlit Young and Innocent, made nearly two decades earlier, even though the Second World War was fast approaching) - which shouldn't stop us remembering the lesson we learned here just two weeks ago (see July 28, above), how 'it is possible and proper for a poet to mean two differing or even opposing things at the same time'. That is, yes, there are 'absurd' things in Harry but, equally, the film works well as a simple pastoral (with indebtedness to classic models). On the other hand, perhaps the best way of saying what I mean is that you have to appreciate both forms as you watch Harry - disregarding one or the other at your peril. (On our 'advanced' Hitchcock discussion group this week I suggested that, even today, 'The majority of critics/scholars still don't seem able to read Hitchcock in terms of deliberate paradox ... opposites yoked non-judgementally together, and the like!') Hmm. If there is one Hitchcock film that I think is indebted to Ionesco, it's The Birds (1963). The body in 'Amédée' grows and grows, eventually forcing the couple out of their apartment. (You may also think of the multiplying pachyderms in Ionesco's 'Rhinoceros' and the proliferating chairs in 'The Chairs'.) In the same way, the bird attacks in The Birds start out with just one single gull attack on Melanie, and gradually become more massive and threatening. Also, as a commentator on Ionesco (in a CD version of 'Encyclopaedia Britannica') once noted: '[Ionesco's] plays build on bizarrely illogical or fantastic situations using such devices as the humorous multiplication of objects on stage until they overwhelm the actors.' The moment early in The Birds when Melanie arrives in Bodega Bay and consults the proprietor of a cluttered general store (see frame-capture below) hints at the greater Absurdity to follow, undoubtedly! Explanations next time. 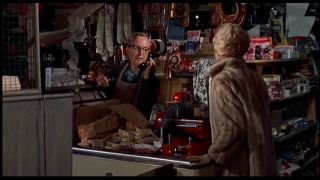