My thanks to SC of Melbourne whose recent email mentions, in passing, 'dirty jokes' in Hitchcock. For example, SC suggests that in The 39 Steps when Hannay (Robert Donat) is lying on the bed handcuffed to Pamela (Madeleine Carroll), Hannay's use of a nail file is symbolic of masturbation. I think that's a bit like the suggestive knife in the Psycho shower scene. Asked whether the shower scene was meant as a rape, Hitchcock replied delicately, 'Well, I think that you get that [connotation] in any case, don't you?' Certainly, in The 39 Steps, an audience senses what's what from the moment that Hannay and Pamela find themselves handcuffed together on the misty moors and their dialogue includes remarks like this: She: 'You're a big bully'. He: 'I like your pluck.' Or, later: He: 'Now place yourself on the operating table.' She: [visibly objects.] He: 'All right, this is Armistice Day, remember?' (That last is a nice piece of defusing, but Pamela isn't about to be let off the hook. For example, as the pair lie on the bed, Hannay starts reminiscing about his Great Uncle Penruddock, 'the Cornish Bluebeard', who killed three wives and a suspicious mother-in-law.) Of course, the mood of licentiousness had been established early in the film, when the stranger called Annabella (Lucie Mannheim) had asked Hannay in the street to be allowed to go home with him. And it was continued on the train (where Hannay first encounters Pamela) in the conversation of the two corset salesmen. Also, Hitchcock admitted that the scene in the crofter's cottage between Hannay and the sweet young wife Margaret (Peggy Ashcroft) was inspired by a certain bawdy tale about a guest for the night who, when given his chance, preferred chicken pie to the hostess's bed! (In the film, notice the tragic fade-out on Margaret's face after Hannay kisses her a hasty but heartfelt goodbye.) Now here's something else I admire about The 39 Steps. The scene in Professor Jordan's study between the Professor and Hannay is a tour de force on everybody's part, but not least the actor who plays the Professor (Godfrey Tearle). What I say is: keep your eyes on his hands! Early in the scene, he takes out a tobacco pouch and starts to make himself a roll-your-own cigarette. Obviously Hitchcock gave the actor this bit of business in order to emphasise his hands. At a certain moment during his preparation of the cigarette - meanwhile Hannay himself holds a convivial drink in one hand and a lighted cigarette in the other - the Professor holds up his right hand and, in a cut to close-up, we see that the top joint of the little finger is missing. In other words, the Professor is the head of the foreign spy ring whom Annabella had warned Hannay against. Naturally Hannay is shocked. Now the Professor asks him what is to be done. By this time, the Professor has finished rolling his cigarette and has inserted it in a holder which he grasps elegantly in his left hand, while his right hand is placed in his pocket so that we might almost suspect that a gun was concealed there. (See frame-capture below.) Indeed, he will shortly suggest to Hannay that Hannay should take his own life with a gun the Professor will give him. But Hitchcock must have sensed that this wouldn't look quite right visually if the actor was still holding his cigarette. So now we get a further bit of business which is managed with the utmost dexterity by the actor. In a neat flurry of movement, he somehow disposes of the (presumably unlit!) cigarette and its holder into his left-hand breast-pocket, then returns his right hand to its trouser pocket and - the topper - produces a gun where we least expected to see it, in his left hand! (One moment he is holding a cigarette there, the next a gun!) There's a further topper. Almost immediately, the Professor's wife (Helen Haye) appears at the door to ask whether Hannay will be joining them for lunch. 'I shouldn't think so', the Professor says. Mrs Jordan nods, having presumably noticed the gun in her husband's left hand (but he now holds it less threateningly, as if he had been merely feeling its weight), and goes away. An audience may never notice but a 'continuity error' follows. No time has elapsed but when we cut back to the Professor, the gun is now in his right hand, pointing at Hannay! But enough of that. Coming back to the suggestive nature of the film, did you know that it ends on a shot of Hannay and Pamela holding hands (the handcuffs are still dangling from his wrist) and the soundtrack suddenly plays a few bars of 'Ain't She Sweet?' That tremendously popular song was composed by Milton Ager and Jack Yellen in 1927 (and had recently been featured in the 1933 Marx Brothers film Duck Soup). Nice touch, Hitch! 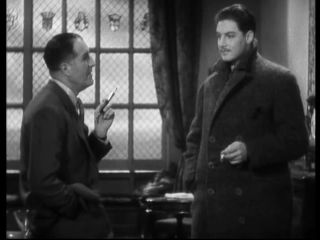