Any discussion of the farmhouse murder scene in Torn Curtain (1966) should embrace the preceding 'echoing footsteps' scene in the art museum. The two scenes are integral, in much the same way as an 'echoing footsteps' episode in The Man Who Knew Too Much (1956) relates - if in lighter vein - to the free-for-all in a cramped taxidermist's workshop that follows. Both times, there's an ambiguous death-and-life opposition (cf entry for September 1, above). Michael (Paul Newman) visits the museum to try and elude Gromek (Wolfgang Kieling). Significantly, the scene is introduced by an exterior view from a tourist-information brochure, followed by a dissolve which effectively allows Michael to walk into the photograph. (He's about to leave behind, perhaps for good, the 'tourist-y' shallowness of the earlier scenes back in Denmark.) The museum's Graeco-Roman facade dwarfs him, and the effect is then accentuated once he enters the building. (In fact, the film's second half is full of moments when Michael seems 'out of his depth'.) A high long-shot shows him crossing a tiled floor inlaid with a magnificent mandala, symbol of wholeness - which is ironic in this film about division, both personal and collective. In the very middle of the mandala, Michael suddenly pauses, listening. All around him are classical columns and artifacts, although the building seems strangely deserted of people (except for one audible set of footsteps besides Michael's own ...). We sense (1) the oppressed East Germans have no time for art, and (2) the Graeco-Roman heritage of Western civilisation, something which the film touches on several times, awaits re-discovery, both by Michael himself (a narrow scientist, as Richard Wormser's novelisation of Brian Moore's screenplay notes) and by the modern world in general. (Just before Hitchcock's film appeared, Carl Jung's 'Man and His Symbols' had noted that the contemporary world was divided into Communist and non-Communist spheres, 'like a neurotic', with the Berlin Wall emblematic. Incidentally, Torn Curtain is full of images of walls, and war ruins, although the Berlin Wall itself is never shown.) Rounding a corner - cf the Vertigo sequoia forest, which this scene also draws on - Michael takes a few more paces and then pauses again: see frame-capture below. Included in the shot is a magnificent black marble statue showing the torment of Prometheus by an eagle. Prometheus, you'll recall, was chained to a rock in punishment for stealing fire for humans from the gods; to further punish and torment him, Zeus sent the eagle to peck at Prometheus's liver, which each evening grew back (and so the torment continued indefinitely). Here, then, Michael's heroic aspect - in risking his life to steal a vital secret from the Communist scientist Lindt (Ludwig Donath) - is being signalled. As partly noted last time, the film contains repeated allusions to fire (and also coldness). Some are almost subliminal: e.g., the Norwegian ship at the start is 'M/S Meteor', while the name of the Elmo Bookstore suggests St Elmo's fire. At it's most basic, the multiple allusions keep the general motif of fire before us, in preparation for the climactic scene in the theatre. (Something similar happens in Saboteur where, between the tragic aircraft factory fire at the start and the film's climactic scene on the Statue of Liberty - which holds aloft the torch of Liberty - are passing references to fire, such as the fire extinguisher in the driver's cabin when Barry receives a lift from a lorry-driver. And of course the saboteur's name is Fry.) But now we may come to the farmhouse scene. In contrast to the echoing tile floors of the spacious museum, the farmhouse adjoins green fields and an earthen farmyard where hens scratch (and Michael identifies himself to the farmer's wife - Carolyn Conwell - by making the sign of the Greek letter 'pi' in the dirt, foolishly forgetting to erase it). For a few moments, all seems peaceful, but then Gromek turns up. It will be his last day alive. For in the celebrated scene that follows, Michael and the Frau must combine to kill Gromek who was about to turn Michael in for spying. I simply want to emphasise how protracted and powerful - i.e., affecting - the scene is. As Hitchcock himself said, he designed it to show that 'it takes a very long time to kill a man' (in another version, how difficult it is to kill a man), which is in keeping with the film's motifs, noted last time, of drawn-out time and of human physical striving (here exemplified when Michael and the Frau are straining to drag an already-wounded Gromek towards the gas oven to asphyxiate him). Harrowing stuff - but absolutely relevant to the film's depiction of the life/death force (call it Will) that underlies the film, as it also underlies (or underpins) all notions of democracy - whose birthplace of course was Greece - the real subject of Torn Curtain. Next time: about the organisation called 'Pi'. 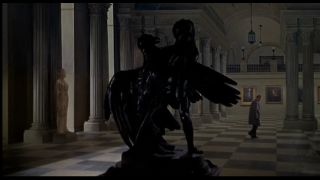