Before returning to Rebecca, here's an insight into Hitchcock that you probably haven't seen before. (It comes from the journal kept by esteemed English novelist Arnold Bennett, an excerpt from which, dated 1929, is included as an Appendix to the just-published scenario-plus-'novel' by Bennett of 'Punch and Judy' which Hitchcock was asked to film - but turned down. My thanks to editor John Shapcott for alerting me to this new publication, which I'll probably review here soon.) A director, clearly Hitchcock, told Bennett: 'I can never begin work until about eleven-thirty in the morning. I have a glass of sherry then, and that starts the flow of ideas. You must have the flow. The film must move rapidly, and so your ideas must come rapidly.' (p. 218) As serendipity would have it, I have just argued in an article on "Hitchcock's Ingenious Adaptations" that it was precisely Hitchcock's imagination, working flat-out, that accounts for the 'holistic' or 'objective' view of life in his films and the accompanying 'sympathy' for the people in those films. Watching them, we actually sense the flow of 'life' itself - to which all of us are subject - analogous to the 'flow of ideas' which Hitchcock described to Bennett. Such a 'Bergsonian' insight informs many turning-points in Hitchcock's films, including Rebecca. Let's come back to that film. Last week I ended by referring readers to Robin Wood's short article on it. I suggested that the article has an element of 'special pleading' that is both its strength and its weakness. Here's a relevant passage. In the second paragraph, in arguing that patriarchal males fear powerful women, Wood claims that someone like Maxim cannot tolerate 'the sense that another male might be "better" [in a woman's eyes] than he was'. But this is wrong-headed of Wood, surely, and ultimately ignores the universal sympathy which I'm saying is the bedrock of the films. Maxim (Laurence Olivier) is not fearful that he will be shown up by Favell (George Sanders), whom the film characterises as an upstart opportunist (although the characterisation itself is superb, and I love Favell's aggrieved riposte to Maxim and his cronies such as Colonel Julyan that they're like a little trades union). The film is specific that what hurts Maxim is that Rebecca will have a child who is not his, who may therefore grow up in front of him and effectively taunt him, day after day, with the prospect of eventually inheriting Manderley which has been in Maxim's family for generations. Simultaneously, the marriage itself will continue a sham, 'a rotten fraud' (as Maxim calls it) - and we can well understand that all of this is enough to slowly drive Maxim mad. (However, Wood, a Gay Liberationist, is playing sexual politics in his article - like feminist author 'Bidisha' in her 'Sunday Observer' piece recently: see June 23, above - and makes Rebecca sound like a single-minded attack on patriarchy, which is to seriously under-appreciate the richness of this complex, humane film.) Incidentally, speaking of Hitchcock's relative objectivity, today I heard critic Richard Schickel use the term 'moral objectivity' to describe Hitchcock (this was on the Commentary for a DVD release of Rebecca); it was apropos Hitchcock's well-known comment to Schickel that a painter like Cezanne didn't care to ask whether the apples he painted were sweet or sour, and how Hitchcock felt the same about the 'content' of his films, provided those films succeeded as 'pure cinema' (which I argue is analogous to the aforementioned flow of 'life' - where 'life' is understood holistically). Now back to Wood's article. I do think that he distorts matters at times. For example, when he writes (third paragraph) of '[t]he antagonism toward Maxim we feel today (in the aftermath of the Women’s Movement)', I start to wonder what happened to Wood's acuity and broad compassion (sympathy). At no point in watching the film do I feel antagonism towards Maxim. Early in the film, we are told that Maxim has lost his paragon of a first wife, drowned at sea. And when, in the boathouse scene (frame-capture below), there's a total reversal (peripeteia) of our understanding about what had happened that day, the effect is surely only to renew and endorse our sympathy towards Maxim, especially as 'I' (Joan Fontaine) now throws her whole being - suddenly grown up - into trying to advise and help him. Granted, there have been a couple of moments when Maxim has shown himself unaware of what 'I' is up against ('Can't Mrs Danvers help you?') and other moments when his moodiness has been very apparent. But these - it seems to me - only give our essential sympathy towards Maxim something to grip on, they dramatise his distraction and vulnerability. I'll conclude my argument next time. 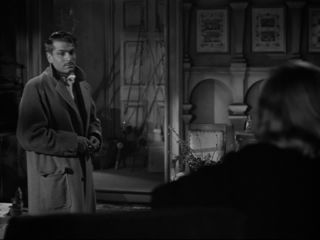