About the murder of Gromek by asphyxiation in Torn Curtain, Hitchcock said that he fully intended the farm house's gas oven to evoke Auschwitz. (He didn't say why he intended it, but we may guess. Probably he was remembering how it was in just such tranquil surroundings as those of this German farm that some of the extermination camps operated.) Equally, he clearly intended the nice irony that Michael and Sarah's escape from East Berlin on board a 'fake' bus is engineered by a Jew, Mr Jacobi (David Opatoshu), working for the resistance organisation called 'Pi' (after the Greek mathematical symbol). Ancient Greece, the birthplace of democracy, is evoked several times in Torn Curtain, with an irony of its own. It represents one of Hitchcock's 'Golden Age' or 'Lost Paradise' symbols (compare, for example, the ironic evocation of Wordsworthian 'bliss' at the start of Hitchcock's Frenzy). Very possibly, on this occasion the filmmakers were thinking of George Orwell's '1984' (1949) with its oppressive regime and, for a time, the characters' dream of 'the Golden Country'. (For a frame-capture from Torn Curtain showing the use of golden light for the East German scenes, see entry for November 3, above.) Now, it's the bus scene itself that I want to focus on this time. Many of my readers may not agree with me, but I find the scene immensely satisfying - far more so than the comparatively crude, and even insulting, bus scene in Hitchcock's Sabotage (1936) with its constant cutting-away to shots of clocks (there's a bomb on board, timed to explode at 1.45 p.m.) and then back to the boy Stevie playing with an 'adorable' puppy (both Stevie and puppy will shortly perish). I first watched that scene with an audience of undergraduates many years ago, and still remember being embarrassed by how 'obvious' it was. On the other hand, the Torn Curtain bus scene is a triumph of Symbolist content. If the farmhouse scene is all about the life/death 'force' (the One, Schopenhauer's 'Will') made palpable, the bus scene is its complement, the depiction of life's diversity (everyday appearance, the Many, Schopenhauer's 'Representation'). In other words, it shows 'democracy' in action, what we are like collectively and need to feel ourselves part of. Although nearly all of the people on the bus are members of 'Pi', they are a motley lot. They include a little man with a cold, a student and his girlfriend, identical twin brothers, and the hysterical Fraulein Mann. ('Doubles' figure suggestively in this film, a reminder that no one is an island. Even the bus has its 'twin'.) They are all ordinary-enough people - yet capable of heroism - and thus represent those from whom Michael and Sarah have been shielded by their ivory-tower existence back in Washington, D.C. With particular irony, Sarah is a Senator's daughter, as the film's novelisation notes. Collectively, too, the people on the bus represent us, the film's audience. Twice they burst into applause for their efforts in the face of danger. On the first occasion, it's Jacobi's quick-thinking, and that of the man with the cold, that saves the day. Significantly, on the second occasion it's Michael who is the hero - by leaping up to press the emergency door-release when an Army deserter has become trapped on board just as security guards approach (see frame-capture below). Michael's quick-thinking will figure again later, during the theatre scene. But of course 'democracy' is an imperfect entity, something that is personified by Fraulein Mann's increasing nervousness and anger until, finally, Jacobi orders her from the bus - but not before she has rounded on Michael and Sarah, telling them she hopes they'll be caught 'for causing everyone so much trouble'. Clearly, the film takes a pessimistic view of short-term progress (it's worth noting that the fall of the Berlin Wall was still over twenty years away), not to speak of beyond that. Indeed, the novelisation, based on the screenplay, has Michael wondering in Schopenhauerian terms about perennial human selfishness and whether he 'would be more willing to risk his life for fellow Americans than for foreigners' - and concludes that he would: 'it was hopelessly built into the human frame, and too damned bad, but what were you going to do?' Still, the film gives Sarah a moment of compassion - when she asks Michael to consider helping the Polish countess (Lila Kedrova) - although her suggestion comes to nothing as events pan out. But the audience has been challenged, and that was always part of Hitchcock's agenda. Note, by the way, that the countess describes herself in the novelisation as 'an old woman. But there is la vie left in me. Lots of la vie.' That, too, was always Hitchcock's ultimate hope - la vie itself. 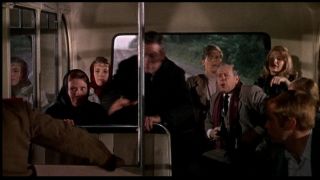