I am indebted and grateful to Stephen Youngkin, author of 'The Lost One: A Life of Peter Lorre' (2005), for the rare production still from The Man Who Knew Too Much (1934) included below. It shows Leslie Banks, Lorre, and Hitchcock on the set of the sun-worshippers' chapel in Wapping where the anarchist gang make their headquarters and stage their final shoot-out with London's police. Note the old-fashioned stove with its ornamented flue behind Lorre: during the chapel-service scene, attended by a motley congregation of mainly old women and housewives, Uncle Clive (Hugh Wakefield) burns his hand on it - one of many indignities he suffers during the film. In an earlier scene, he has had a perfectly-good tooth extracted by a sinister dentist (Henry Oscar) and now, during the chapel-service scene, he must submit to being hypnotised by the equally sinister Agnes (Cicely Oates), a forerunner of Mrs Danvers in Rebecca. Youngkin quotes a script note about Abbot (Lorre), describing him as 'an invalid ... helped by a rather straight-faced woman [i.e., Agnes] who is apparently [his] nurse'. In fact, 'Nurse Agnes' - towards whom Abbot shows great tenderness when she is shot dead by a police bullet - may be his sister or even his mother (?!). Meanwhile, he has controlled his gang - 'my children' in the script - with what Youngkin calls 'a malicious grin rather than an iron fist'. Note the possibility of a perverted Oedipalism here. Charles Barr has correctly noted how the film's plot grows out of the exaggerated tensions of a nuclear family (Bob and Jill Lawrence and their daughter Betty) implied in the opening scenes at St Moritz; what he doesn't note is the counterpoint by which an underlying sterility and perversion is implied by scenes more reminiscent of Fritz Lang's film about a child-murderer, M (1931), starring Peter Lorre, and Howard Hawks's gangster classic Scarface (1932) in which Tony Camonte (Paul Muni) is incestuously fixated on his sister Francesca (Ann Dvorak). Hitchcock of course gives Abbot a scar of his own, as well as a wide streak of white hair which may be either some sort of fashion statement (in keeping with Abbot's tie, waistcoat, moleskin jacket, and chiming-watch) or a hint of albinoism. (As for underlying sterility and perversion, Rebecca works similarly: for example, Manderley has come under the dominance of Mrs Danvers, while meanwhile all of Manderley's menfolk seem to have become impotent and denatured. For more on this, see my 'The Alfred Hitchcock Story'.) The chapel scenes are masterly, well worthy of study for how Hitchcock controls every element in them for maximum expressiveness. The comedy of 'the battle of the chairs' while Mrs Sprocket (Clare Greet) plays the organ - to cover the noise - is a highlight: it comes close to every choirboy's fantasy of running riot in church! G.K. Chesterton would have appreciated it, I'm sure. Lorre's minimalist acting is used to the hilt here and elsewhere. Youngkin quotes Hitchcock's belief in 'getting good actors who know how to express a mood or intention with [just] the slightest gesture or change of expression'. Throughout the chairs episode, Abbot simply leans against the wall, watching. Only when he sees Clive making a getaway through a window that has become uncovered by a flying chair, does his composure even begin to slip. And when, afterwards, he takes his annoyance out on Bob by pushing him, he immediately apologises, in his almost obsequious, Uriah Heep voice: 'Sorry, please forgive me.' (But Hitchcock repeatedly gives Abbot a sense of humour that Heep never shows.) Let me mention just one other scene for now. During the climactic siege of the gang's headquarters, the police crowd into nearby buildings, including a confectioner's shop whose proprietor watches speechless when one of the police officials, Binstead (D.A. Clarke Smith), in hat and coat, helps himself to some of the merchandise. The proprietor is played to good comic effect by Charles Paton - a change of pace for him after having played Alice's shopkeeper father in Hitchcock's Blackmail (1929). Hitchcock further milks the scene for comedy when Binstead's boss (H.G. Stoker), in bow tie, arrives. The police chief takes Binstead aside and asks him for news. In an ambiguous moment, Binstead visibly swallows - no doubt some guilt at being caught eating on duty is mixed with haste to give his boss the information sought! But he is deferential and efficient, a good-natured moment which harks forward nearly 40 years to Frenzy (1972) when Chief Inspector Oxford (Alec McCowen) tells Sergeant Spearman (Michael Bates) that he looks 'positively glutinous with self-approbation'. (Check out the respective scenes. You'll see what I mean.) One more instance of the wise saying that (Hitchcock's) style is often just self-plagiarism. 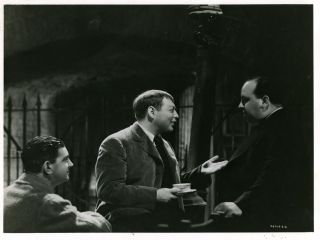