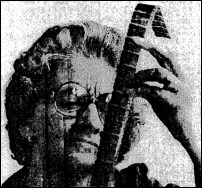 Alminda Horwood, who is working against time at the National Film Archives, Aston Clinton, Buckinghamshire, to try to save Britain's irreplaceable stock of films, which is fast decaying. The British Film Institute, where she is senior repairer, has begun a programme to copy its decaying nitrate films on to acetate by the year 2000. It estimates it needs an extra £700,000 a year to complete it.

The National Heritage Memorial Fund has given £100,000 for 1982. Among the films to be given emergency treatment is London Town, made in 1946, the first large-scale Technicolor British musical, starring Sid Field. Others include the unseen silent version of Hitchcock's Blackmail (1929).