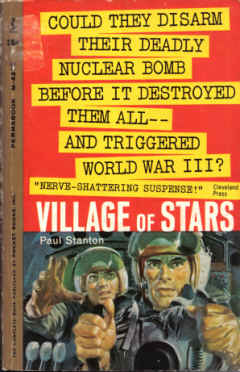 Alfred Hitchcock secured the rights to Arthur David Beaty's novel Village of Stars (written under the pseudonym Paul Stanton) on its publication in 1960.

In April 1960, Harrison's Reports included a brief news brief to say, "Alfred Hitchcock is to produce and direct Village of Stars (tentative title)."[1]

The same month, Motion Picture Daily included the project in a list of upcoming Paramount productions: "Alfred Hitchcock will produce and direct the tentatively-titled Village of Stars."[2]

A few months later, The Times newspaper carried the following article in September:[3]

Mr. Hitchcock's Plans - Films from a Novel and a Play

After "Psycho", Mr. Alfred Hitchcock is as busy as ever: if anything, even busier, for apart from keeping a fatherly eye on the televison series "Alfred Hitchcock Presents", he has added two new feature films to his schedule, both of which will be made before the previously announced "No Bail for the Judge", an adaptation of Mr. Henry Cecil's book to be made in Britain with Miss Audrey Hepburn and Mr. Laurence Harvey.

First on the list is "Village of Stars", adapted from the suspense novel by Mr. Paul Stanton, which he will direct for Paramount. This concerns the plight of a pilot sent out to drop a powerful bomb on an unspecified target and then called back; the bomb is designed to explode when it drops below a certain altitude, the defusing mechanism refuses to work, and the plane's supply of fuel is limited. The film will be made in colour and Vistavision.

An equally characteristic situation occurs in the second film. "Trap for a Solitary Man", which Mr. Hitchcock will direct in Cinemascope for Twentieth Century-Fox early next year. The story, based on the Paris stage success by M. Robert Thomas. shows us a young married couple on holiday in the Alps. The wife disappears, and after prolonged search the police bring back someone they claim to be she; she says she is the man's wife, and only he denies it. No casting is yet announced, but Mr. Hitchcock says that the principal parts in both films will be taken by major international stars.

Hitchcock had apparently purchased the rights to Stanton's book after work on The Blind Man was abandoned.

Another Hitchcock project that the studio considered in 1960 was The Day Christ Died.