How did Hitchcock, Kubrick and Cecil B DeMille fill their films with such extraordinary, realistic landscapes? Jonathan Jones on the vanishing art of matte painting 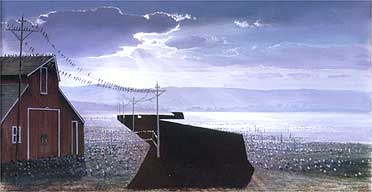 The Birds is Alfred Hitchcock's most defiantly implausible masterpiece, a film which sets out to make us scared of sparrows and succeeds in being a poetic essay in landscape, inner demons, and the surreal. And yet the most daring of all the daring things about this 1963 film is that it is composed largely of paintings. These are so exquisitely natural and precise that they allow Hitch to make the real and the unreal, the quotidian and the nightmarish, impossible to tell apart. Most stunning of all is the painting for the film's final scene - a bird-flecked landscape under a silvery apocalyptic sky.

Not that we are supposed to know any of this, because this is a classic of "matte" painting, an art which conceals its art, "an invisible art" as the authors of a nicely illustrated chronicle of its forgotten heroes call it, not intended to be recognised as painting at all but to blend into the fiction of cinema.

Film-makers have always used painted backdrops. A matte painting is a step up, done on glass with an area of blackness - the "matte", derived from the French word for flat, dull paint - cut out so that it will not register on film; by a variety of methods, the most sophisticated being optical printing, this painted world is merged with models, real landscapes and actors to build the cinematic illusion. In the 1960s and 70s a deeply fashionable, avant-garde manner of painting known as Photorealism employed an air-brushed smoothness in an apparently naive recreation of the visible world. Matte painters had been doing something similar for decades.

The artist who created the painted world of The Birds is Albert Whitlock, responsible for what my video copy boasts are "nearly 400 trick shots". Whitlock was a British-born matte painter and effects specialist who had first worked with Hitchcock in Britain in the 1930s, on The Man Who Knew Too Much and Sabotage. He is one of the most talented figures in the history of matte painting and a central figure in the disaster films of the 70s. His ability to paint imaginary scenes of destruction with a glassy, objective sheen made the delirious urban nightmare of the 1974 film Earthquake possible. The last shot of a smoking, twisted, ruined American city is a painting by Whitlock.

It's only when you see the original, surviving matte paintings, framed as works of fine art, that you realise how old-fashioned, how 19th-century Hollywood is. Look at the works of Hollywood matte painters and you will see their descent from Victorian popular painters such as John Martin, the true father of the cinema of disaster, who painted realistic, detailed, large-scale visions of the end of the world that filled Victorians with rapturous horror as they witnessed trains plummeting from viaducts into a flaming void.

The painted catastrophic landscapes of films such as Earthquake, Planet of the Apes - the vision of the Statue of Liberty buried on the shoreline that Charlton Heston stumbles on to at the film's climax is a painting by Emil Kosa Jr - and the 1976 science-fiction film Logan's Run, for which matte painter Matthew Yuricich created a hyperrealist vision of the Lincoln memorial covered with weeds, are in a direct line from Victorian painting. Whitlock, Yuricich and other matte painters owe far more to popular Victorian art than they do to modernism. In fact, there is no modernism whatsoever in Hollywood matte painting, by definition, because modernism questions what is real, whereas the job of matte painting is to make us accept fictional worlds without questioning them. Its roots can be traced directly back to 19th-century academic painting, the kind of art that modernism rejected; an art of super-naturalist historical and fantasy scenes, which made the 19th-century artists Thomas Couture and Lord Leighton the Cecil B DeMilles of their day.

If the apocalyptic visions of Albert Whitlock echo those of John Martin, almost every other Victorian painting genre has cinematic descendants. The use of matte painting in Roman epics has kept alive, as a kind of secret tradition, naturalistic scenes of gladiators and assassinations in ancient Rome by the great French academic painter Jean-Léon Gérôme. The cityscape of ancient Rome that Peter Ellenshaw painted for Stanley Kubrick's Spartacus (1960), with its brooding sky and photographically sharp ancient temples and houses, might easily have been by Gérôme. Sci-fi matte painters create intergalactic empires, space stations and death stars with the same meticulous realism Victorian painters gave to desert landscapes and exotic cities. Matthew Yuricich's painting for Forbidden Planet (1956) of a desert with purple trees and green sky has the photographic sublimity of a Frederick Church painting of the Hudson Valley.

Hollywood's vision of the middle east hasn't got much beyond Victorian orientalism, either. For Robin Hood: Prince of Thieves (1991) Michael Pangrazio painted a bronze dawn vista of medieval Jerusalem, the kind of vision of "the mysterious east" that is omnipresent in Victorian art. In fact, report the authors of The Invisible Art, shooting on location in Jerusalem "was out of the question, as Operation Desert Storm had just begun". Through painting the film concocts an Arabian Nights vision straight out of Victorian fantasy art that the real Middle East fails to provide.

Today the craft of matte painting has been made obsolete by the virtual paintbox of digital cinema. But the aesthetic lives on. The smooth, self-effacing appearance of matte paintings, which try to be as real as photographs, is a look that anticipates and influences digital images. Matte painting always aspired to the virtual. And the return of older kinds of epic cinema that the digital age has made possible - most obviously with Gladiator and the coming wave of ancient epics - means that the archaic, 19th-century tradition of history painting the matte painters kept alive is now more potent than ever. If you want to find visual sources for Lord of the Rings, check out some Victorian battle paintings and the medievalism of the Pre-Raphaelites.

People often say painting died in the modern world, that the age of mechanical reproduction made it a relic, of value only to conservative fetishists of fine art. But the one place painting never died is in the films that were supposed to have killed it.