A recurrent Hitchcock narrative involves a gifted but errant person (or two) plus others who may only figure in 'the small stuff of history' yet clearly are decent achievers (if I may call them that). The main part of the story is given considerable psychological weight (often involving ego), but at stake behind that story is something bigger again. I think, for example, of Rope (1948), of Vertigo (1958) - and of Torn Curtain (1966). The latter, which I watched this week, is about the apparent defection of US physicist Michael Armstrong (Paul Newman) to the Communists at the height of the Cold War. He calls himself 'Wrong Way Armstrong' because he effectively started at the top (in Washington, D.C.) and now, denied US funds, must venture elsewhere, professing that his concept of an anti-missile missile makes 'the terror of nuclear war' obsolete. But is that his actual motivation? (His press conference on arrival in East Berlin is one of the film's set pieces - featuring one of several masterly crane shots - but whose emphasis on behind-the-scenes jostling carries a sense that power is the issue here.) Next, I find the depiction of the East German escape organisation known as 'Pi' - with parallels to wartime underground movements - one of several ingredients that round out the film for me, emotionally. Not only is 'Pi' up against the 'infamous' East German Security (no doubt meaning the feared Stasi), headed here by the urbane Heinrich Gerhard (Hansjoerg Felmy, one of several fine performers in Torn Curtain), but it carries on the democratic spirit in its own special way - one antecedent in Hitchcock is clearly the circus troupe in Saboteur (1942). Further, the film shows the bravery and selflessness of most 'Pi' members: for example, Mort Mills (the policeman in Psycho) as The Farmer has a pivotal role, turning up a second time late in the film to help point Michael and fiancée Sarah Sherman (Julie Andrews), now on the run, towards escape, but disclaiming special merit: 'We're nobody, ma'am, just city folk out for a stroll.' (For some intangible reason, 'Pi' makes me think of a community radio station I know: there's a superb government classical music station, and there's the station I'm referring to, run by dedicated volunteers, which does comparable work, if occasionally you can detect a relatively untrained voice announcing the discs!) What I'm suggesting is that there's plenty of 'Symbolist' content in Torn Curtain - it's not just about the bare story. Unfortunately, that story strikes many viewers as hackneyed, which I don't think is entirely fair. For one thing, if the film looks, first, too jaunty, and then, at times, old-fashioned (one scene in an East German hotel room reminds me of a shot from a silent film by Tod Browning or E.A. Dupont), I think those 'effects' are largely deliberate. The Copenhagen scenes at times resemble the popular "Look at Life" or "This Colourful World" featurettes that used to support the main feature (such as Torn Curtain) in cinemas - here John Addison has even attempted to imitate the 'canned' music from such featurettes! As for the relatively sombre and 'old-fashioned' look when the film goes over to East Germany, the momentary evocation of a silent film (which Berlin churned out by the hundreds each year) is expressive and surely a permissible 'in-joke' by Hitchcock. Moreover, that scene is another of several in which the film draws on real basic emotion, in this case Sarah's anguish after following Michael 'by instinct' to East Berlin and hearing him give his defection speech. (Yet another such moment may be the last shot of the dispossessed Polish countess, played by the wonderful Lila Kedrova from Zorba the Greek, lamenting, 'My sponsors, my sponsors from the United States of America ...' I'll unpack Kedrova's performance later.) Note the frame-capture from this scene below. It's filmed in as flat a manner as possible, imitating a stage (as silent films often did). But the real point is in the dialogue that Michael delivers, telling Sarah that he simply 'can't explain' his actions to her - just as another Michael, in I Confess (1953), based on an 'old-fashioned' stage play, also 'can't say' what the Crown Prosecutor wants him to say. (Hitchcock's own 1929 silent film The Manxman, from the already old novel by Hall Caine, also has such a scene - a staple of stage melodrama and not less effective for that.) An interesting touch this time is the inclusion of the old-fashioned lamp bracket above Michael's head. It intimates the main reason he 'can't tell' Sarah the truth about his recent actions: the room may be bugged. To be continued 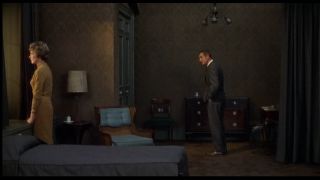