This item comes out of a discussion this week on our 'advanced' Hitchcock discussion group about something Alma Hitchcock said of her husband. In 1960 she told an interviewer that her husband had 'a wonderful gift for putting things into perspective', and added: 'He has the most completely balanced mind I have ever known and has a talent for total objectivity'. That's a wonderful assessment of Hitchcock, a real key to both the man and his films. For a start, put it alongside the philosopher Schopenhauer's remark about a great artist's 'gift of genius' which 'is nothing but the most complete objectivity' although 'imagination is needed, in order to complete, arrange, amplify ... all the significant pictures of life'. What, I asked the Group, are some examples of Hitchcock's objectivity? Among the answers was the finale of The Birds, 'with its serene, detached observation of devastating catastrophe as well as the power of catastrophe to bring out humanity's best ... and worst' attributes. I agree. I ventured that the endings of many of Hitchcock's films show a similar quality, citing Rear Window, a film with a wonderfully balanced tone and where Hitchcock never appears to take himself too seriously yet which has a constant aural subtext of 'life is a dream' (the recurrent motif in the snatches of song and music we hear). Someone also quoted Hitchcock himself, about how one should 'always try to look at things as though you were remembering them three years later'. This has more to do with people's actions in the world - social relations - of course. But let's come back to Hitchcock's films. I have always thought that many of them are like parables, with broader implications than meet the eye. For example, Hitchcock said of Lifeboat (1944) that it was designed to show the Allies the need to resolve their differences in order to cope with the single-minded Fascist threat (represented by the Nazi U-boat commander, Willi). You could apply that idea to several situations in the world today. Equally, I have always thought that The Wrong Man (1956) is not just about mistaken identity in the case of a few petty larcenies - though the effect of the police's allegations on the innocent Manny Balestrero, and his family, is devastating enough - but could be extended to mistaken identity in more serious cases, like murder, where the penalty is death, and irreversible. I'm sure that Hitchcock, in his objectivity, saw this very clearly. In recent years there have been several studies, some of book-length, published about such tragic mistakes. Also, there has been the very fine Errol Morris documentary, The Thin Blue Line (1989), about a case in Texas. I thought of it this week when a news item was published about another Texas case dating from 1983, now shown to have been definitely one of mistaken identity. (To read about it, click here: http://www.abc.net.au/news/2012-05-17/wrong-carlos-executed-in-texas-report/4017262.) But we were talking about Hitchcock's objectivity. Well, I went back to take another look at the book '"I Am Innocent!"' (2008) by Jay Robert Nash. (It has a couple of brief entries on the Balestrero case.) And I spotted something I'd overlooked before. In the Chronology of wrongful convictions, I noticed that the very first such case listed is that of Susanna (590 BC) of the 'Susanna and the Elders' story in one of the apocryphal books of the Bible. The attempted rape of the innocent Susanna has, of course, been depicted in paintings by many artists, including Rubens and Rembrandt - and including the painting seen in Hitchcock's Psycho (1960) when Norman Bates removes it from his parlour wall to spy on Marion. (See frame-capture below.) Well, it now occurs to me that Hitchcock may originally have been interested in the story for precisely its wrongful-conviction aspect. I did some further reading. I see that the elders made up their accusation against Susanna to punish her for not yielding to them. She was falsely accused of adultery, brought to trial, and convicted. Fortunately, her accusers were found out (a good story in itself - look it up) and were themselves put to death. Next time: more about The Wrong Man and Hitchcock's objectivity. 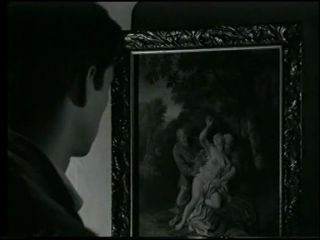