A widely reproduced posed photograph appears to show William Hitchcock dressed in a military uniform outside a greengrocery bearing the name "W. HITCHCOCK Fruit Salesman". Alongside him is a pony carrying a young boy, also dressed in a similar uniform.

Although many sources claim the young boy is Alfred Hitchcock, on balance, the evidence points towards it being Alfred's older brother, William John Hitchcock.

The earliest found reproduction of the photograph appears in Michael Haley's The Alfred Hitchcock Album published in 1981, which names the boy as Alfred's brother William.

Donald Spoto used the photograph in his biography, The Dark Side of Genius: The Life of Alfred Hitchcock, first published in 1983, and stated the boy was Alfred Hitchcock. In his review for The Times, Hitchcock's official biographer John Russell Taylor used this as an example of the inaccuracies in the book:

[...] the first picture in the book, for example, is not, as claimed, of the young; Alfred Hitchcock and his father, but, fairly evidently even from internal evidence, Hitchcock père and Alfred's elder brother William celebrating the Diamond Jubilee two years before Alfred was born.
— The Times (19/May/1983) - Hitch hatchet job

Biographer Patrick McGilligan re-used the photograph in his biography, Alfred Hitchcock: A Life in Darkness and Light, published 2003 and again claimed it was Alfred on the pony. He also went further and stated the shop was 517 Leytonstone High Road — the house where Alfred Hitchcock was born in August 1899.

In his book, Hitchcock in Context (2014), Stephane Duckett states:

Seeing Hitchcock decontextualised can often contribute to the image of him as strange: the oft-reproduced photograph of Hitchcock on a pony with his father in identical uniforms is almost certainly a picture of his older brother at the time of the ‘near hysterical’ national celebrations for the relief of Mafeking in 1900. The uniforms they are wearing are Boer period and would not have been worn after the revelations of the deeply shameful Boer concentration camps at the close of the war.

The image appears in the following books, along with the quoted description and credit:

There is no known evidence that William Hitchcock served in the military, so it is unlikely William is wearing his own uniform.[1] As noted by Stephane Duckett, the man is wearing a khaki drill uniform[2] and a slouch hat — due to a shortage of pith helmets during the Second Boer War, slouch hats became common issue to soldiers.

At the far right of the frame is a young girl and an adult woman. Most versions of the photograph are cropped and hide the adult woman, but the pair appear to be posing as part of the photograph with the woman looking towards the camera and the girl, possibly distracted, looking away. They are positioned so as to not be blocked by the pony. If the original negative still exists, the shot was likely framed to show the woman fully.

The flags on the building indicate a national celebration was taking place and were very unlikely to have been left up permanently, as flags are rarely seen on other period photographs of London shops. Frustratingly, the two key flags that would help date the celebration are curled up so that the circular design in the centre isn't visible.

From the left, the flags appear to be: 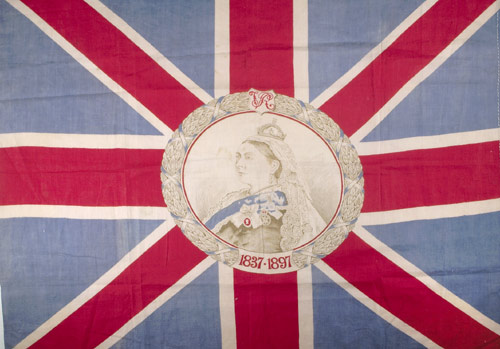 The two Union Jack's with a central circular area are typical of royal celebrations including coronations and jubilees, such as the one shown here made for Queen Victoria's Golden Jubilee in June 1897. If the flags on William Hitchcock's shop were indeed for the Golden Jubilee, then certainly they would have been taken down before Queen Victoria's death in January 1901. In June 1897, William John Hitchcock would have been 8 years old.

The Second Boer War took place from October 1899 until May 1902. The "Relief of Mafeking" celebrations occurred in mid-May 1900. Alfred Hitchcock was only a few months old at the time, whilst William John Hitchcock would have been 11-years-old.[4]

Following Queen Victoria's death, her son Albert Edward was crowned Edward VII in August 1902.[5] The boy on the pony is too old to be a 3-year-old Alfred Hitchcock but is possibly a little too young to be a 14-year-old William John Hitchcock.

The next coronation occurred in June 1911, by which time William Hitchcock was no longer a greengrocer.

At least one author has stated the shop is 517 Leytonstone High Road, this is very unlikely. The photograph shows a two-storey building with upper windows that have distinctive horizontal lintels and decorative vertical mouldings.

Although 517 was demolished (apparently in the 1960s) and there are no known photographs of the property, other nearby period properties are still standing.[6] As with other properties from the same period in the local area, the windows have a flush relieving arch lintel made from bricks, usually painted in a lighter colour, or a slightly arched moulded lintel. This row of properties adjacent to the block which contained 517 were likely built around the same time:

The style of the lintel and mouldings in the photograph is very similar to those found on properties situated on Manbey Grove, Stratford, where William Hitchcock's father Joseph lived in the 1880s:

The shop appears to stand forward of the building to the right (which has signage starting with a "D") and the front of the shop has at least 3 windows on the upper floor. Neither is consistent with the known facts about 517, which was a narrow mid-terrace property and very likely to have had 2 windows.

According to the Hitchcock biographers, William Hitchcock opened a second greengrocery on the opposite side of the road from 517. The exact house number is unknown and few period properties have survived on that side of the road, but the photograph could possibly be of that second shop.

The boy appears to be aged around 10-years-old but has not yet reached puberty. By the time Alfred Joseph Hitchcock was 9-years-old, and possibly as young as 7-years-old, he was living at a fishmongery on Salmon Lane, so that counts against it being him in the photograph.

If the girl is Ellen Kathleen Hitchcock and the woman is Emma Jane Hitchcock, which seems likely if it was a posed family group photograph, Ellen would be 4 years younger than William John Hitchcock, but 7 years older than Alfred Joseph Hitchcock. As such, it's more likely the boy is William John as the two children look close in age.

The most probable conclusion is that the photograph was possibly taken during the coronation in 1902, but most likely in mid-1900 during the Relief of Mafeking celebrations due to uniforms, as claimed by Stephane Duckett. If it is the latter, William was apparently re-using flags from the Jubilee which included a profile of Queen Victoria in the centre. As such, the boy is Alfred's brother, William John Hitchcock, as Alfred was still an infant. This conclusion is also backed up by the first known publication of the photograph, along with John Russell Taylor's comments — as official biographer, Taylor would have had access to family photograph and he visited Ellen Kathleen's home during researching Hitch: The Life and Times of Alfred Hitchcock.

If the photograph is a posed family group and the boy on the pony is William John, the absence of Alfred is a little puzzling. If it was taken in mid-1900, Alfred would have been around 9-months-old.

The property is most likely not 517 Leytonstone High Road but probably a second shop owned by William Hitchcock. As the property is likely wider than 517, it may have been chosen for the posed photograph due to it looking more prestigious than the narrower 517.

To reach a stronger conclusion, it would be helpful to identify the exact location (the location of William's other grocery shops may be listed in a trade directory) and to check the original image held by the British Film Institute to see if a house number is visible and if it is less tightly cropped.