This area of Leytonstone had undergone a period of rapid housebuilding during the last two decades of the 1800s and, by 1895, most of the fields and farmland around the junction of Leytonstone High Road and Harrow Road — known locally as Harrow Green — had been built on. By 1920, the entire surrounding area had been heavily urbanised with tightly packed terraced housing.

William Hitchcock moved his family to the property in 1896 and ran it as a small greengrocery.[3] By 1904, the family had a telephone installed and could be contacted by dialing Wanstead 569.

According to biographer John Russell Taylor:

The wholesale side of William Hitchcock’s business covered a considerable area, supplying small local shops and general stores with fruit and vegetables; the retail side also flourished, to such an extent that he rapidly took over another shop on the other side of Leytonstone High Road.[4]

On Sundays after mass William and Nellie had to lend a hand minding the second shop over the road, but Alfred was never allowed to work in the shop. Despite which his very earliest memories are connected with the business. Right behind the house were the ripening sheds, and a vivid early impression is the scene inside them: with the great bunches of bananas ripening by the warmth of gas flares, the sight and the smell and the distinctive hiss. When he was a little older he was allowed to go out with the deliveries of fruit and vegetables to grocers all over the Epping area, often a whole day round by horse-drawn van. Another process which fascinated him was the husking of walnuts, which used to come into the shop still in their fleshy green outer coats and be husked ready for sale by the shop workers.[5]

Sometime between 1906 and July 1908, the family moved 5 miles southwest to Salmon Lane, Limehouse.[6] As Hitchcock later recalled watching the electric trams running down Leytonstone High Road, this discounts McGilligan's claim that the move took place before August 1906, as the electric tram service started in December 1906.

Writing in 1969 to a local reporter researching his roots, Hitchcock begged off any sweeping statements and said his only clear memory of Leytonstone was "the Saturday night when the first electric tram made its maiden journey" down the streets on an intensely cold December day in 1906.[7]

Maps of the area from 1951 onwards show the four houses from 517 to 523 as building, which implies they may have been converted into much larger single property.

By the 1980s, most of the row had been demolished and a petrol station currently occupies the site. Today, only 507 remains standing and several of the other nearby properties have fallen into disrepair. The Waltham Forest Heritage Commission erected a plaque on the side of the petrol station, which was unveiled in August 1994 by actor Barry Foster.[9][10]

In 2014, London-based signwriter, designer and illustrator Mateusz J. Odrobny worked with illustrator Anna Mill to paint a mural inspired by The Birds (1963) on the exteriors of the row of properties running from number 527 to 533.

Situated a short walk to the west of where Alfred Hitchcock was born, St. Patrick's Cemetery is the final resting place of at least five members of his immediate and extended family, including his parents and his sister.

This map from 1895 shows the precise location of number 517, with the house shaded red and the rear yard or garden, where presumably the "ripening sheds" stood, shaded green. The tramway marked on the map was for horse drawn trams and wasn't electrified until the end of 1906.[11] According to John Russell Taylor's biography, Hitchcock briefly attended the school which was adjacent to the rear of their house. 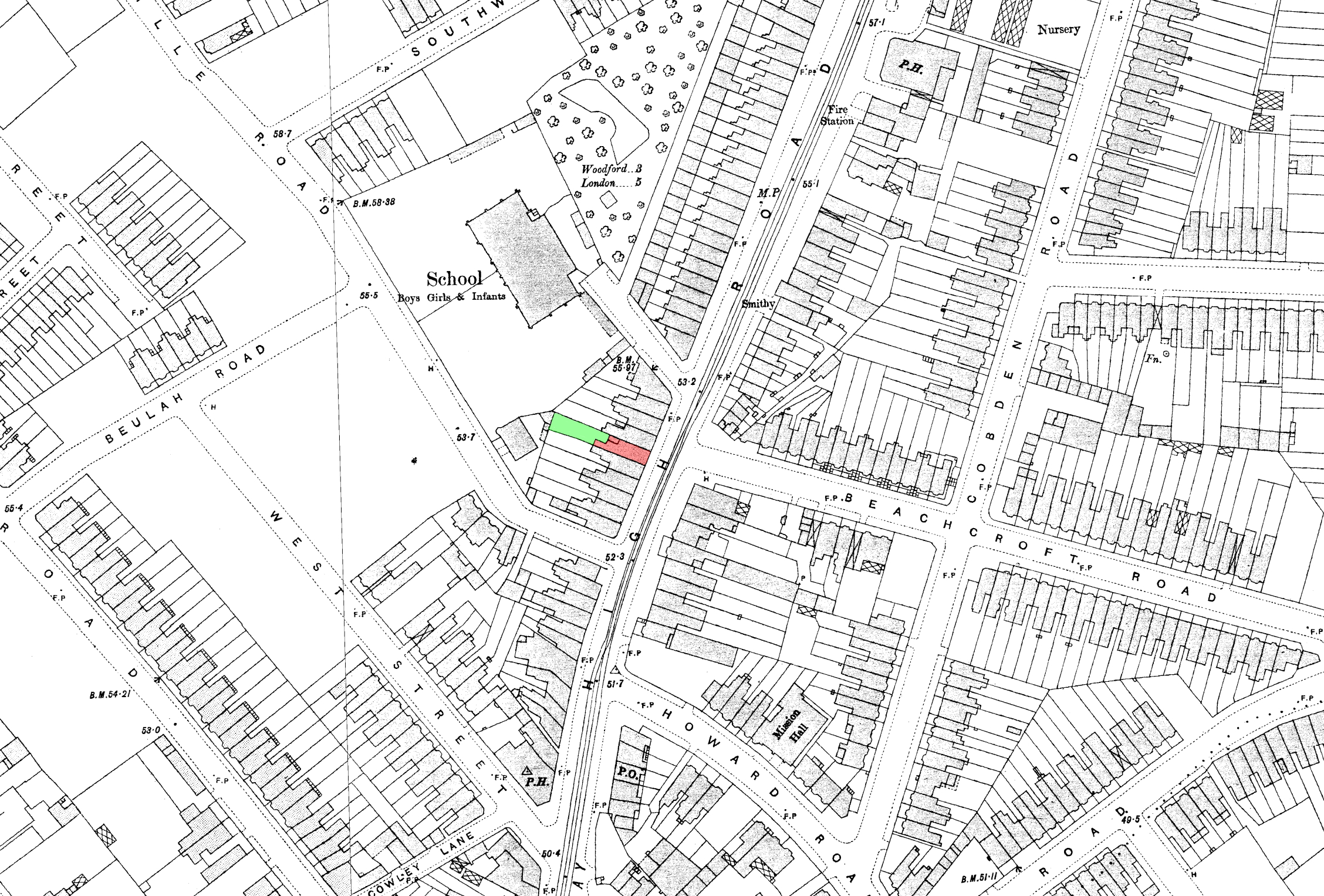 The garage where the plaque is located: