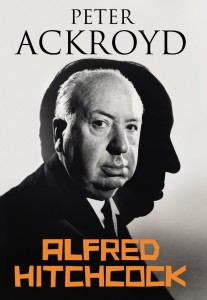 I was very fortunate to receive a pre-publication copy of Alfred Hitchcock, the new biography by Peter Ackroyd, which is released in the UK tomorrow. As noted on Wikipedia, Ackroyd is a noted “biographer, novelist, and critic with a particular interest in the history and culture of London”.

As discussed in a previous blog post, there are no shortage of books about Alfred Hitchcock and Ackroyd is the latest to provide a biographical overview of the director’s life.

I must admit that I find myself wanting to write two reviews of the book, so feel free to pick the review which you feel is most relevant!

Review #1: For those unfamiliar with Hitchcock’s life…

Ackroyd has done a commendable job of distilling down Hitchcock’s life into around 250 pages, making this a much more digestable read than McGillian’s Alfred Hitchcock: A Life in Darkness and Light (which runs to nearly 800 pages) and Spoto’s The Dark Side of Genius: The Life of Alfred Hitchcock (approximately 550 pages), and around 50 pages shorter than Taylor’s Hitch: The Life and Times of Alfred Hitchcock.

I guess for many people, their perception of Hitchcock has been coloured by Tippi Hedren’s allegations of sexual harassment and by HBO’s The Girl, on which Spoto acted as a consultant. Spoto’s own biography, first published in 1983, which, as Stephane Duckett noted, is very much in the genre of the Mommie Dearest style sensational biographies popular in the late 1970s and early 1980s, did much to paint the director as a “dirty old man”, twisted by his perversions and sexual desires. However, I find it hard to take Spoto seriously and Dark Side is filled with too much baseless speculation on Spoto’s part and I would encourage everyone who watched The Girl to read the Save Hitchcock blog.

Ackroyd finds, I feel, the correct balance between discussing Hitchcock’s actions and behaviour on set and contextualising it within the broader film-making process. Whilst Hitchcock was deeply afraid of confrontations, he was a master of manipulating actors into giving career-defining performances. For example, Hitchcock made use of some of the existing on-set hostility towards Joan Fontaine during the filming of Rebecca (1940) to nudge the actress into giving a nervous and timid performance which suits her character perfectly. Whether Fontaine could have delivered that performance of her own volition remains an open question, but there seems little evidence that she resented Hitchcock once she realised what had happened. Fontaine would, of course, go on to star in Suspicion (1941), for which she received her one and only “Best Actress” Oscar.

I find myself agreeing with Louise Jury’s review for The Independent in that the book would have benefited from being longer. The book ends with Alma Reville’s death in 1982 and it left me wishing for one final chapter in which Ackroyd wrapped things up with a discussion of Hitchcock’s ongoing influence and legacy.

Other parts of the book would, I feel, have benefited from slightly more detail. In particular, I was hoping Ackroyd would have fresh insights into Hitchcock’s early life and influences — McGilligan and Spoto suffer from a certain romanticist viewpoint of life in Victorian England which rose-tints their discussions of the young director. Whilst Ackroyd does bring his perception to bear on the topic, it was all too brief.

If you haven’t read a biography of Hitchcock before, I’d certainly recommend Ackroyd’s Alfred Hitchcock as a worthy read, perhaps to be followed by McGilligan’s more in-depth biography at a later date.

Review #2: For those familiar with Hitchcock’s life…

By the time I finished reading the book, I’d compiled a page-long list of errors and things that I felt I needed to check to see if they were errors.

I suspect part of this is due to Ackroyd’s desire to produce a relatively short book (at least compared to McGilligan and Spoto), which at times necessitates a simplifying of actual events, or occasionally missing out details covered by the longer biographies. However, there were some disappoint errors, such as:

These are mostly minor complaints, but I feel they collectively work to undermine the book to a certain extent.

My other major concern is the lack of references and footnotes. Ackroyd makes excellent use of quotes throughout the book, but the lack of sources will be of frustration to some Hitchcock scholars.

Overall, I felt Ackroyd failed to bring enough new insight to Hitchcock’s life and career to make his book stand well apart from the previously published biographies. It’s likely that Hitchcock completests will still want to read Alfred Hitchcock, but I suspect, like me, they’ll be left feeling a little disappointed. Having said that, I still thoroughly enjoyed reading the book and I’m sure you will too!