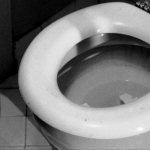 Everyone knows that Psycho (1960) was one of the first — if not the first — Hollywood feature film to show a flushing toilet, but was it the first Hitchcock film to show a toilet? The Lodger (1927) has a scene set in a bathroom, but no toilet is shown. Perhaps the Buntings only have an outside toilet? Nor do we get to see Sir John Menier’s toilet in Murder! (1930) whilst he shaves in… (read more)