The Strange Case of Eliot Stannard 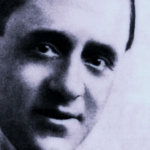 70 years after his death, Eliot Stannard remains an enigma. No-one knows how many films he wrote scenarios or screenplays for — the Internet Movie Database currently lists 168 writing credits, other sources state around 80, whilst an advertisement for Filmophone Limited which appeared in The Times on 19 December 1928 stated Eliot had by then “written over 400 scenarios”. Whatever the true figure, he was one of the most prolific British film writers of… (read more)

Posted in Eliot Stannard by Dave Pattern
One Comment »