Posts filed under the times

Did young Alfred design these? 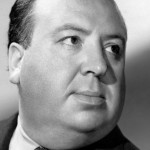 In November 1914, a 15 year old Alfred Hitchcock joined W.T Henley Telegraph Works as a junior technician. According to McGilligan’s biography, Hitchcock moved to the advertising department in 1917… His new job was more picture-oriented: designing, laying out, and pasting up the advertisments and brochures for Henley’s products. The following are adverts for Henley’s that appeared in The Times newspaper in October and November 1917 — I wonder if the 18 year old Hitchcock… (read more)