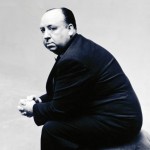 Over at MacGuffin, Ken Mogg’s latest entry in “The Editor’s Week” (22/Sep/2007) discusses the film “The Ipcress File”. I remember reading somewhere that Hitchcock was keen to make an anti-James Bond film — one in which the viewer sees the mundane side of espionage (rather than the glamorous and STD risky lifestyles of Messers Connery and Moore). Also, “The Ipcress File” contains many camera shots from weird angles, including one from above a light bulb… (read more)