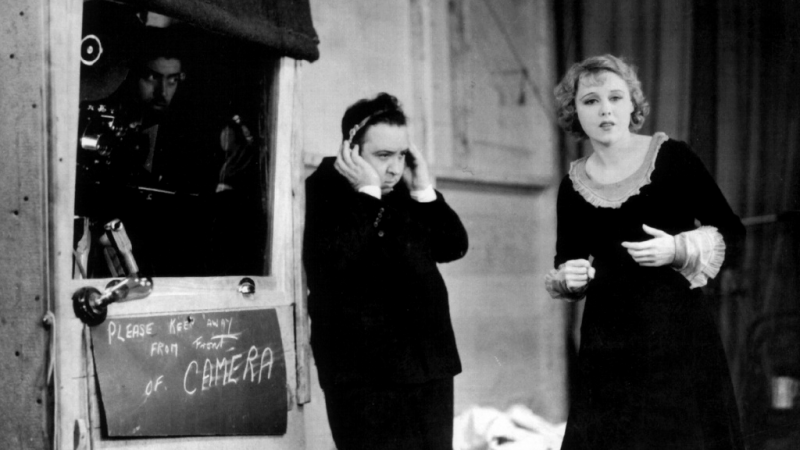 Another interesting article from the National Library of Australia’s Trove site, this time from the Brisbane Sunday Mail (27/Oct/1929):

Something of a sensation has been caused in the British film world by the banning of the British “talkie,” Blackmail, by the Australian film censor. Nobody appears to know why, and the action is regarded as even more strange when it is realised that the British film censor passed the picture, and no critic in the Motherland or in America had questioned its propriety.

Moreover, this “talkie” was generally regarded as having created a standard from which the Americans had much to learn. When the matter has been dealt with by the Appeal Board more should be known of the reasons for banning. The manner in which the film was received at its initial showing in England is shown by the following review of the film culled from the London Looker-On: 

Blackmail at its first midnight showing proved that there is no reason at all why British “talkies” should not hold their own against any from across the water, and once again proved that it is good directors this film industry needs. Badly directed, Blackmail would have defied all the cast’s excellent work, and been terribly tedious. But each player is so absolutely the type to act as the characters acted, from Johnny Butt‘s Scotland Yard “Bobby” to Donald Calthorp‘s blackmailer, which nearly “stole” the picture

This is not merely a photographed stage play with mechanical dialogue. You do not feel that there are shots and camera angles introduced just to show where the camera scores over the stage. Alfred Hitchcock, the director, is not afraid of silence  he uses long minutes of it more effectively than any gasps, shrieks, or groans.

Blackmail has a strong theme. A girl kills an artist in defence of her honour. Her lover, a Scotland Yard man on the case, discovers the glove she has left, and the girl confesses to him; he determines to keep silent, but their secret is shared by a blackmailer known to the police. He is identified as having called at the artist’s house on the night of the murder, and the girl’s lover determines to call in the police.

It is his word against the blackmailer’s, and it is obvious which will be believed. The blackmailer’s nerve gives way, and he escapes. After a vain endeavour to hide in the British Museum, he crashes to his death through the glass roof of the reading room. The girl’s lover returns to Scotland Yard with the news in time to prevent the girl’s confession to save an innocent man suffering for her guilt.

Since the confession would make no difference to the blackmailer now, the two act on the advice contained in the old adage that “silence is golden,” and look forward, apparently, to a happy marriage. Cyril Richard (an Australian) as the artist, Anny Ondra as the girl, and John Longden as her lover, head an excellent cast.

After an appeal was lodged, the film was eventually passed but only after around 2 minutes of footage from the scenes in Crewe’s apartment — including the murder — had been cut from the print. The following year, the Sydney Morning Herald (16/Jun/1930) reported on the film’s release:

The British talking film “Blackmail” gained some notoriety a few months ago when the Commonwealth Censor refused to pass it: and only the overriding power of the Appeal Board has made it available to the Sydney public, with certain excisions. Consequently, one went to the Capitol Theatre on Saturday expecting something extremely sordid. In actual fact, the one climactic incident where the cuts have been made is the only part of the film to which exception can be taken, but, judging from the nature of what leads up to and what immediately follows the hiatus, the censored passage must have been distinctly coarse. A few more small cuts might, yet be made without spoiling the continuity of the story. It is a pity the producers have thought fit to introduce this unpleasantness; because, from a dramatic point of view, the rest of their work is distinctly impressive.