Think of Hitchcock and invariably you think of his weight. Although biographer John Russell Taylor notes that the director was “painfully self-conscious about his appearance”, Hitchcock knew that his weight was a strong publicity hook — it was something that made him memorable to the public.

Whilst Hitchcock’s weight became a serious problem later in life, particularly when he began to suffer from painful arthritic knees in the 1970s, many of his early collaborators were surprised at how sprightly he was. The Hitchcocks first home at 153 Cromwell Road, London was reached up a steep flight of stairs and he would reportedly bound up the staircase — two steps at a time — without being out-of-breath.

Speaking at the Screen Producers Guild on March 7th, 1965, Hitchcock joked about his weight:

Who is the real Alfred Hitchcock? I shall begin by correcting several misconceptions about myself which have grown up over the years. It is high time I set the record straight.

First of all, there seems to be a widespread impression that I am stout. I can see you share my amusement at this obvious distortion of the truth. Of course I may loom a little large just now, but you must remember, this is before taxes.

I am certain that you are wondering how such a story got started. It began nearly 40 years ago. As you know, I make a brief appearance in each of my pictures. One of the earliest of these was The Lodger, the story of Jack the Ripper. My appearance called for me to walk up the stairs of the rooming house. Since my walk-ons in subsequent pictures would be equally strenuous — boarding buses, playing chess, etc. — I asked for a stunt man. Casting, with an unusual lack of perception, hired this fat man! The rest is history. He became the public image of Hitchcock. Changing the image was impossible. Therefore I had to conform to the image. It was not easy. But proof of my success is that no one has ever noticed the difference.

Our cherubic friend had a tragic ending. It was during the 1940s while he was trying desperately to make an appearance in a picture. Unfortunately Tallulah Bankhead wouldn’t allow him to climb into the lifeboat. She was afraid he’d sink it. It was rather sad watching him go down. Of course, we could have saved him, but it would have meant ruining the take. He did receive an appropriate funeral. We recovered the body, and after it had dried out, we had him buried at sea.

You may be sure that in securing an actor for my next picture I was more careful. I gave casting an accurate and detailed description of my true self. Casting did an expert job. The result: Cary Grant in Notorious.

As you know, I still remain a prisoner of the old image. They say that inside every fat man is a thin man trying desperately to get out. Now you know that the thin man is the real Alfred Hitchcock.

As Robert E. Kapsis documents in “Hitchcock: The Making of a Reputation” (1992), Hitchcock had begun emphasising his weight in the late 1930s:

The personal idiosyncrasy which he seemed most anxious to exploit at this time was his obesity. In fact, when meeting with journalists, he would frequently wear clothing that accentuated his girth […] When he began seriously to consider moving to Hollywood […] Hitchcock used publicity about his Falstaffian girth to attract the American press.

Reporting on his 1937 visit to America, TIME stated:

When he arrived in the U.S., famed, fat, English Cinema Director Alfred Hitchcock (The 39 Steps, The Man Who Knew Too Much) expected to have trouble with the food. After toting his 252 lb. through a tour of Manhattan restaurants, Director Hitchcock announced he found U.S. food excellent, especially the ice cream. Said he, “Such ice cream I would not trade for a steak & kidney pudding, a boiled silversmith with carrots & dumplings, or a Kentish chicken pudding. In fact, I like it.”

Hitchcock dining in a New York restaurant in August 1937 with his wife Alma, assistant Joan Harrison, and daughter Patricia.

A similar style of reporting continued on into the 1940s, for example in the Saturday Evening Post article “300-Pound Prophet Comes to Hollywood” (22/May/1943):

Hitchcock’s physique made a greater impression on [Hollywood] than his English reputation. Three hundred pounds distributed around five feet, nine inches of height are not to be ignored. The newcomer was a sensation, with his cycloramic torso, setting-sun complexion, round, wonder-struck eyes, and cheeks inflated as if blowing an invisible bugle. People reacted to him like children at sight of balloon giants in Macy’s parade.

Against the 300-pound background everything relating to Hitchcock attracted attention. He drove about in a tiny Austin which fitted him like a bathing suit. He was reported to have the appetite of a lion farm, although, in reality, he is not an immoderate eater.

Although Hitchcock had attempted various diets throughout his life, with varying degrees of success, two events in the early 1940s made him seriously reconsider his lifestyle. Firstly, his mother Emma passed away in September 1942 and then, a few months later, his older brother William died suddenly in January 1943. As biography Patrick McGilligan noted:

One repercussion from William’s death was Hitchcock’s suddenly vehement determination to curtail his own eating and drinking. He had begun watching his calories, but cheated whenever he felt like it. One day, however, Hitchcock fell on his arm while running to catch a train, and he was shocked by the tremendous pain caused by his own massive weight crashing down on him. Hitchcock also told interviewers that he had received a jolt of a different kind one day in Santa Rosa filming Shadow of a Doubt, when he glanced at his reflection in a shop window, and saw a grotesquely swollen man staring back at him.

He hovered around three hundred pounds. His back ached constantly. Now his physician, Dr. Ralph Tandowsky, a nationally recognized authority on cardiology and cardiovascular disease and a pioneer in the diagnosis of heart problems, joined Mrs. Hitchcock in imploring the director to stop cheating, and to take his diet seriously.

So for 1943, Hitchcock made a New Year’s resolution: From now on, he would eat and drink sensibly. He liked to tell interviewers that his weight-loss diet consisted of only a cup of coffee for breakfast and lunch, and a steak and salad for dinner. It wasn’t always that ascetic, but his resolve to lose one hundred pounds in record time was proof of tremendous willpower, and he swiftly lost enough to unveil the new “thin” Hitchcock for Lifeboat. How would the director contrive to squeeze his expected cameo into a film set entirely at sea, in a lifeboat? Even Hitchcock was stumped for a while, until the solution dawned on him. He would immortalize his profile in a before-and-after newspaper advertisement for the Reduco Obesity Slayer corset. “My favorite role,” he crowed to François Truffaut.

Hitchcock’s 1943 diet was captured in a famous series of photographs which, as McGilligan notes, were used for his cameo appearance in Lifeboat (1944): I’ve just stumbled across this article, which appeared in the Derby Daily Telegraph (07/Aug/1940), and which talks about Hitch’s diet: 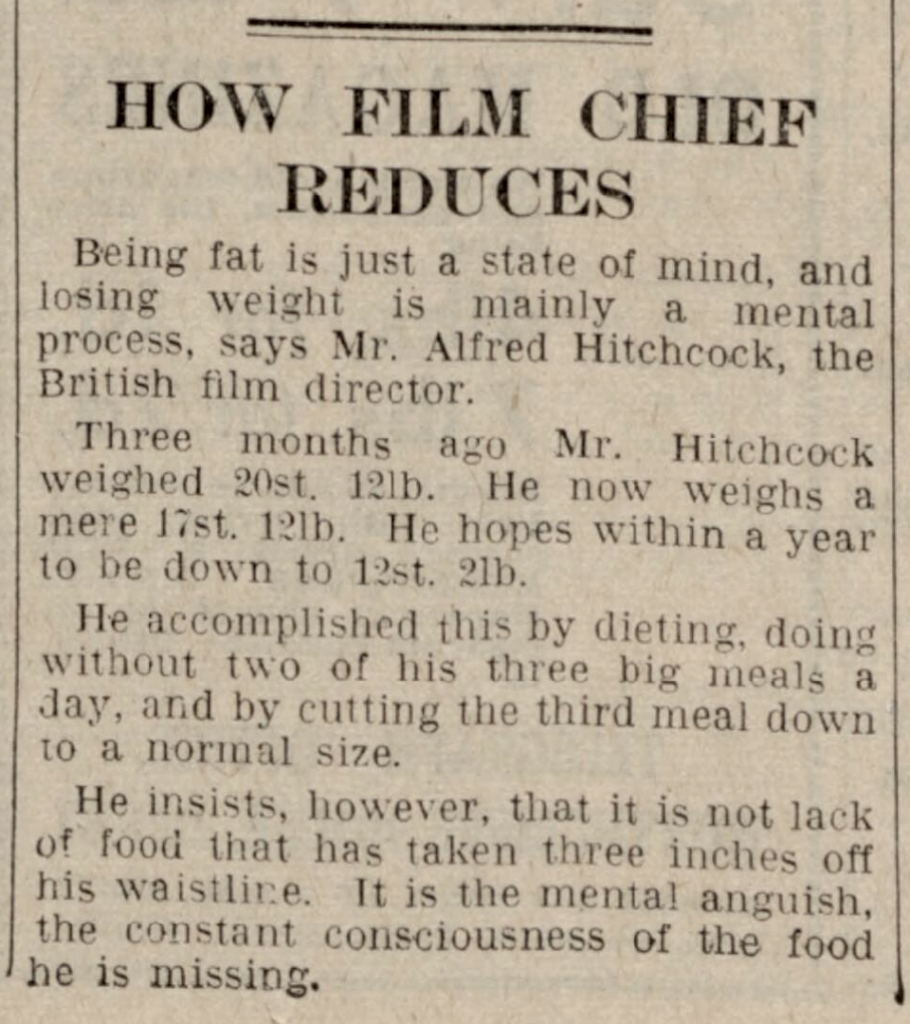 One Response to The Incredible Shrinking Hitchcock