The list of Hitchcock projects that failed to move into production (or even pre-production) is long and relatively well documented. However, I believe this is one which has been missed by Hitchcock scholars — a project to film John Buchan’s Huntingtower.

It’s well known that Hitchcock was a fan of Buchan’s novels and he would eventually adapt The Thirty-Nine Steps in 1935. It is also well-known that he considered adapting two other Richard Hanney novels — Greenmantle and The Three Hostages.

In the middle of 1926, almost a decade before The 39 Steps, Hitchcock had finished production on The Lodger and was likely planning his next project for Michael Balcon. Ultimately, concerns about the The Lodger‘s commerciality resulted in Ivor Montagu being hired to re-edit and tighten the film before it was released theatrically.

On June 8th 1926, the Dundee Courier reported that Hitchcock was in Scotland scouting for suitable locations to film an adaptation of Buchan’s 1922 novel: 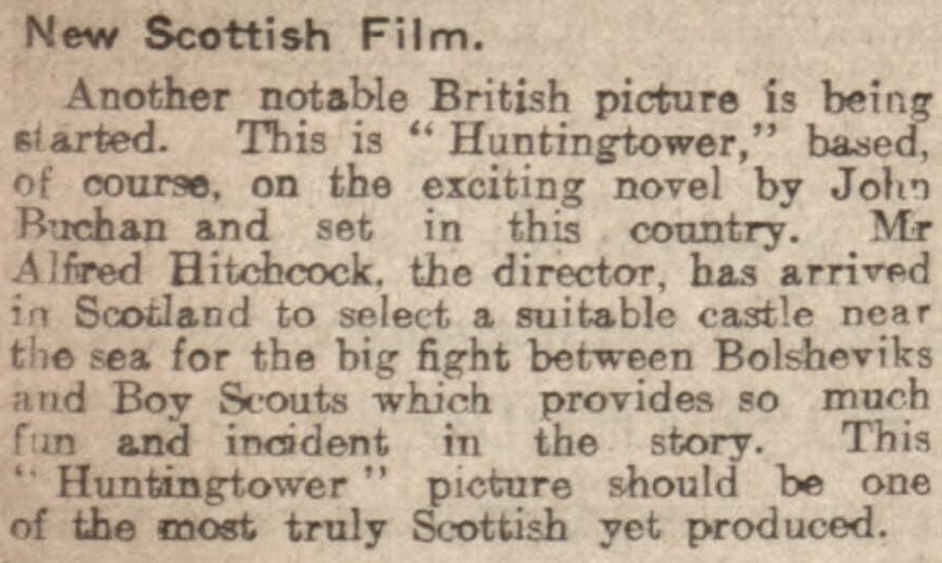 Another notable British picture is being started. This is “Huntingtower,” based, of course, on the exciting novel by John Buchan and set in this country. Mr Alfred Hitchcock, the director, has arrived in Scotland to select a suitable castle near the sea for the big fight between Bolsheviks and Boy Scouts which provides so much fun and incident in the story. This “Huntingtower” picture should be one of the most truly Scottish yet produced.

What exactly happened next is uncertain and I could find no other newspaper reports about the project being linked to Hitchcock. Perhaps the uncertainty surrounding The Lodger meant the director had to drop his plans for something more modest?

The following year, director George Pearson filmed his adaptation of the story, starring Harry Lauder and Vera Voronina, and this was released in cinemas in November 1927 by Paramount Pictures. Although Pearson apparently filmed some scenes in Glasgow, he used a castle south of the Scottish border — Bamburgh Castle in Northumberland. 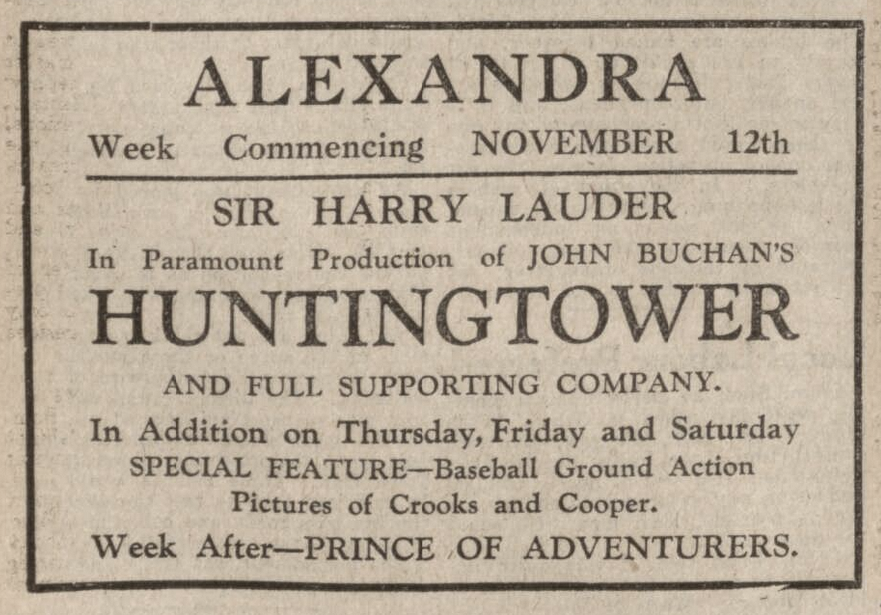