This piece of news almost slipped me by, but Cohen Films and Finishing Post Productions have partnered with the British Film Institute to restore Jamaica Inn (1939). 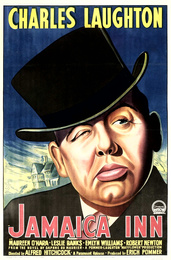 According to the press release (PDF):

The restoration project marks the first time RRsat has undertaken this technique. With the help of FPP, the RRsat team in London was tasked with achieving the best possible restoration, at the highest suitable data rate, in order to create a high quality master for the Hitchcock film.

The original nitrate negatives were sourced directly from the BFI, and these elements were then scanned at 4K resolution, utilising the ArriScan to create a DPX file sequence. The elements were suffering from shrinkage and warping, and because of this had to be scanned without pin registration.

Once scanned, the 4K sequence required huge amounts of stabilisation to combat the shrinkage. The team at RRsat worked tirelessly to ensure that this was achieved, whilst also dealing with the effects of image warping, which needed to be electronically pinned in order to prevent images bouncing around the screen.

The nature of these issues required multiple software fixes on a frame-by-frame basis before the dirt and scratch removal could begin. The density within the image also fluctuated creating a pulsing effect, which again had to be mapped and removed digitally – painstakingly carried out by the RRsat restoration team.

After the pre-fix, RRsat proceeded to undertake more traditional restoration techniques, with multiple software packages such as PFClean, AfterFX and Dark Energy being used to treat the dirt and scratches. Grain treatment was also used to ensure the finished result was as close to the original cinematic atmosphere of the original. The same was done for the audio, which was in bad shape. RRsat’s senior audio technician was brought in to remove unwanted ‘crackles and pops’, whilst digitising the audio in the process.

Tim Lanza, director of Licensing at Cohen Films, said: “Our collection of films spans some of cinema’s most dynamic eras, and we take pride in making sure they are kept in the best condition so they can be enjoyed by audiences for years to come. It was vital we worked with skilled partners on this project, which is why we turned to RRsat and FPP to deliver.”

Jason Tufano, director at FPP, added: “We’ve worked with RRsat on a number of projects, and both teams work very well together in piecing together restorations of classics such as this. Jamaica Inn had some especially tricky issues to deal with, but as you can see from the finished result we managed to overcome these and rejuvenate this British classic.”

Matt Bowman, commercial director, RRsat says: “Jamaica Inn was the last Hitchcock film to be made in the UK, and we certainly took pride in creating a master of the highest quality. Our award-winning colourist was drafted in to grade it on our DaVinci Resolve system, which produced some of the best restoration work we’ve achieved so far. FPP were on hand to attend the grade and playout, to ensure the theatrical integrity of the project.

The restoration was screened as part of the 2014 Cannes Film Festival.

Hopefully this means we might eventually see a Bluray release!

One Response to “Jamaica Inn” restored