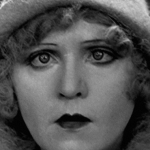 A couple of pieces of Hitchcock news via Alain Kerzoncuf! On Thursday September 27th, The Space will be streaming Hitchcock’s 1928 silent classic “Champagne” with a new score by Mira Calix, live from the BFI on London’s Southbank. Betty Balfour Secondly, Dread Central has a cool video showing scenes that were trimmed from the US release of “Psycho” (and have never appeared on any of the DVD releases). Janet Leigh on the job!