I guess it’s fairly well known that François Truffaut’s 1968 film The Bride Wore Black was part homage to Hitchcock. It also marked the second time that Truffaut hired Bernard Herrmann to score one of his films — the first time being Fahrenheit 451 (1966). In one of those odd little coincidences, I stumbled across an advertisement for the publication of Cornell Woolrich’s novel from the New York Times (13/Feb/1941)… …ironic, huh?

“And the winner is…” 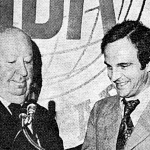 I recently stumbled across this photo article in the May 1974 edition of The Independent Film Journal… Highlighting the annual International Film Importors and Distributors of America annual awards ceremony was the presentation by Alfred Hitchcock of the Joseph Burstyn Award for Best Foreign Film and the Best Director Award to Francois Truffaut for Day For Night. If anyone knows the actual date the awards ceremony took place, please let me know! 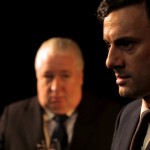 Here’s one for all you Hitchcock completests! Currently available on the Amazon France site for €23.20 on a combined DVD and Blu-ray release is a 70 minute film of Alain Riou and Stéphane Boulan’s stage play “Hitch”. According to my PC, both discs are region free but the transfers are 25 frame/sec PAL, so you’ll need to check that your TV and player can handle that if you live in a country that uses the… (read more) 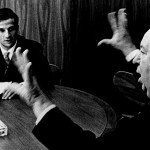 In early 2006, Tom Sutpen started posting parts of the famous Hitchcock and Truffaut interviews from 1962 on his “if charlie parker was a gunslinger…” blog. All in all, Hitchcock and Truffaut recorded over 50 26 hours of interviews (with the help of translator Helen Scott), and these were eventually edited down into the “Hitchcock/Truffaut” book (released in 1967). Approximately 12 hours of the interviews were broadcast a few years ago on French radio as… (read more)