I’ve been planning to write something about J.M. Barrie’s Mary Rose for a while now, but I thought I’d share this little bit of trivia that I don’t think any of the Hitchcock scholars have stumbled across before… 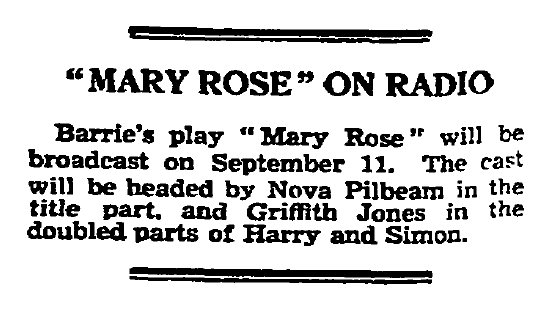 On Sunday 11th September, 1938, BBC Radio broadcast an adaptation of Mary Rose starring Nova Pilbeam, Griffith Jones and Irene Rooke. Pilbeam had previously appeared in The Man Who Knew Too Much (1934) and Young and Innocent (1937) and would marry Penrose Tennyson a few months later. Sadly, Penrose died in July 1941, aged just 28. Pilbeam had previously played the lead role in Barrie’s Peter Pan at the Palladium Theatre in the mid-1930s and an interview from that time stated:

Nova is more interested in film work than in the theatre and would prefer to devote most of her time to pictures. Nevertheless, she thoroughly enjoys acting on the stage and one of her greatest ambitions is to play the title role in Barrie’s “Mary Rose.”

I can’t help but feel there’s a certain irony in Pilbeam playing the role of Mary Rose — a woman in her 20s who is trapped in time, who fades but never grows old. Pilbeam retired from acting whilst still in her 20s, her young image trapped in fading celluloid and in the memories of those who have seen her films. Like Mary Rose, her long dead husband fought in the Royal Navy.

Even now, Pilbeam remains strangely ethereal, rarely granting interviews. She was last known to living in north London and will be 95 years old this November. Along with Maureen O’Hara, she is the only surviving lead actress from any of Hitchcock’s British films (1925-39).

Speaking of her final acting roles in the 1940s, she said:

The films I made [then] were not mostly very good and I didn’t particularly like the business of filming. My first husband was in the profession and, had he not been killed, I might have stayed in it.

Anyway, back to the 1938 BBC Radio adaptation of Mary Rose, of which there are unlikely to be any surviving recordings. Given Hitchcock’s deep love of the play, it’s likely he would have listened to the broadcast (perhaps whilst staying at Winter’s Grace). The day after the original broadcast, the Glasgow Herald reviewed the radio play:

In February 1940, the BBC broadcast another adaptation of the play. Although a few initial newspaper reports suggested this would be a repeat of the Pilbeam broadcast, it actually starred Barrie’s original Mary Rose, actress Fay Compton, in the title role. Had Hitchcock been successful in adapting the play in the 1960s, he’d hoped that Compton would appear in the film — whether the 70-year-old actress would have played the role of Mary Rose’s mother or that of the housekeeper (Mrs. Otery) is unclear.