This little curio titled “Alfred Hitchcock Presents: The Great Hitchcock Murder Mystery” appeared in the Salt Lake Tribune‘s weekend magazine, “This Week”, on Sunday 4th August 1957. Unfortunately the images are from the best quality scan I have, but hopefully you can make out Hitchcock hamming it up (if anyone has a better quality scan, please let me know!)

It’s seems highly unlikely the photoshoot was specifically staged as a response to a question from a reader, but I’ve not been able to find any further details as to the exact background. In Hitchcock: The Making of a Reputation (1992), Robert E. Kapsis states:

The humorous side of Hitchcock’s persona often surfaced in odd places. Consider, for instance, an article which appeared on 4 August 1957 in This Week Magazine. The piece is in the form of a photo thriller purportedly written by Hitchcock in response to a query from a reader of the magazine who wrote, “On his TV show, ‘Alfred Hitchcock Presents,’ Hitchcock does stories by others.” “Has he ever written a story himself?” Hitchcock agreed to write a photo thriller for This Week Magazine. The written text, however, is overshadowed by the accompanying photographs of Hitchcock masquerading not only in all the male roles but in all but one of the female parts as well. “An accident of age and profile makes it impossible for me,” writes Hitchcock, “to counterfeit the charming young lady.” Be that as it may. But it doesn’t preclude Hitchcock from posing as Lady Agatha (the Countess of Windblown) and Withers, her personal maid. Clearly, the article is a triumph for Hitchcock the ham actor at the expense of Hitchcock the mystery writer.

Kapsis reproduces this photograph which he captions “Lady Agatha” that isn’t included in the actual magazine article (it is actually Hitchcock playing the role of Withers, the maid): It’s worth noting that Alec Guinness — an actor Hitchcock had apparently hoped to work with in a film adaptation of Malice Aforethought — similarly played multiple roles in Kind Hearts and Coronets (1949), including a character named “Lady Agatha”. 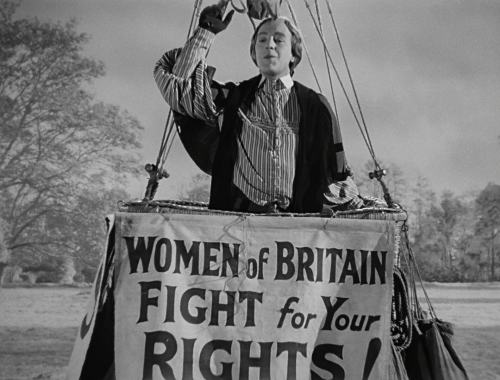 It’s uncertain exactly when the photographs were taken (the photographer was Maxwell Copian) but, at the time they were published in early August, Hitchcock was busy finalising the shooting script for Vertigo, which began filming in late September 1957. QUESTION: “On his TV show, ‘Alfred Hitchcock Presents,’ Hitchcock does stories by others,” writes Mr. Valentine McGovern, of Long Island, N.Y. “Has he ever written a story himself?” We asked Mr. Hitchcock, and he said, “No.” “But would you?” we pursued. His answer appears below.”

ANSWER: I have been asked by the Editors of This Week Magazine to brew up a mystery story according to the priceless formula I use for the shadow plays which you are privileged to view in the better cinemas and on the flickering screen of your television sets.

I consented to this brash request only on condition that I be permitted to play each part myself, since even the most talented of producers is at the mercy of insensitive actors. There is one exception in the casting: An accident of age and profile makes it impossible for me to counterfeit the charming young lady.

The plot of my little fable contains all the ingredients of a chilling tale, and those of weaker constitution are warned that they may not survive the exquisite horrors about to be perpetrated. It is a tale of Merrie England in one of its less merrie moments, and you are to imagine that you have been transported to the edge of Dartmoor and are approaching. Windblown Towers, a particularly repulsive 16th-century manor house situated near the village of Chipping Windblown.

Quite understandably, I have caused a mist, dripping with cold rain, to hang over the setting, a device which is useful in all tales of suspense.

For characters, I have selected those indispensable, though often expendable, regulars in this type of classic drama. The leading role I have assigned to myself is that of Police Inspector Cranston, without whose interference no murder story can be successfully mucked up.

Next is a noble lord, who had regrettably become a corpse before our, first picture was taken. The victim is none other than Lord Windblown himself, poor fellow. Then there is his widow, Lady Agatha, Countess of Windblown, with her personal maid, Withers.

Sir Roderick Gaines, an eccentric London solicitor, becomes involved in the proceedings because he is a weekend guest at Windblown Towers. In addition, we have Small, the butler, Cripps, the gardener, and Police Constable Bootle.

Finally the one ray of sunshine in our somber tale. She is the Honorable Lavender Mopeland, whose estate has been so reduced by Lord Windblown’s greedy peculations — poor child, he has been her guardian — that she has been forced to find employment as a barmaid at the Hare & Harebells, a local pub.

So, with these preliminaries out of the way, let us get on with our story. It is known as “The Great Hitchcock Murder Mystery.”

Now study the cast above, the tense scene, and start the story below As Police Inspector Cranston, my first task on arriving at Windblown Towers was to get the immediate situation in hand. I was admitted by Small, the butler, and I found Police Constable Bootle already on the scene. Bootle was completely baffled by the case. He had been unable to determine the manner in which Lord Windblown met his death, and I must confess that I was similarly baffled as I looked around the library for clues.

I directed Small, the butler, to summon the occupants of the house, and he had soon assembled Sir Roderick, the London solicitor; Cripps, the gardener; and Withers, Lady Agatha’s personal maid. Lady Agatha, Withers reported, was somewhat upset by Lord Windblown’s death, and had begged to be excused. Sir Roderick was carrying a billiard cue when he entered, and I examined this closely for traces of blood. It was clean. Questioning each suspect in turn, I learned that it was Small who had discovered the murder when he came in at 10 to bring the master his nightly tumbler of brandy. Sir Roderick averred that he had been practicing carom shots alone in the billiard room. Withers insisted that she had been upstairs with Lady Agatha, who had just returned from London. Cripps explained that be had been placing a small tarpaulin over the night-blooming cereus. I was faced with four airtight alibis. Baffling. Suddenly, staring at the corpse, I noticed a knife protruding from the tweeds of the unfortunate nobleman. “There’s your cause of death, Bootle,” I said quietly.

I examined the knife handle carefully and realized that it was not of local manufacture. “This knife has been brought down from London,” I said, looking straight at Sir Roderick.

The solicitor blanched, and on questioning him further I learned that he was in the habit of carrying such a knife. Sir Roderick, as the questioning developed, was a compulsive apple-eater who could not bear the skin, and he used the knife to dispose of it.

“You — you’re not charging roe, Inspector?” he quavered. I considered the point a moment. There was no hurry, and I turned abruptly. “Withers,” I ordered, “take me to Lady Agatha.”

Lady Agatha was unpacking a large bag in her dressing room when I entered.

“Here, Withers,” she said, holding out two knives which appeared to be exact duplicates of the one which had caused Lord Windblown’s death. “Take these to cook.” I stared at the murderous weapons. “Do you realize that it was a knife of this manufacture which killed your husband?” I demanded.

“Really?” she observed indifferently. “Served him jolly well right,” and she would say no more.

During my interrogation of Small, he had mentioned the Honorable Lavender Mopeland, Lord Windblown’s ward. After leaving Lady Agatha, I hurried to the Hare & Harebells where she was employed. The sight of the knives in Lady Agatha’s dressing room had confused me, but my mind was momentarily cleared by the sight of Lavender polishing glasses. It was after hours, so the pub was deserted except for her.

“Good evening. Inspector,” she said cheerfully, blowing on a glass. “Have you found out yet who stabbed Lord Windblown?”

My senses quickened into reluctant suspicion at this incautious remark. “Miss Mopeland,” I said. “No one outside Windblown Towers knows that Lord Windblown has even been murdered. How could you know that he has been stabbed?”

I felt it necessary to request Lavender to accompany me back to Windblown Towers. She made no objection. The lovely creature showed not the slightest emotion as she gazed on the lifeless form of Lord Windblown.

“Served him jolly well right,” she said, and I caught my breath, for those had been Lady Agatha’s exact words. I determined to confront the two women immediately, and sent Small to fetch Lady Agatha.

Small returned in a moment. Standing at the right of the door, he announced, “The Lady Agatha, Countess of Windblown,” and an owl hooted outside.

Lady Agatha’s eyes swept the room until they came to rest on the person of the Honorable Lavender Mopeland. “You,” she said in a voice which dripped with bate, and advanced on the proud young woman.

“Keep your distance, Lady Agatha,”, Lavender warned, and drew from her bodice a kitchen knife which was a duplicate of all the others.

If I had reason before to suspect the Honorable Lavender Mopeland, my suspicions were now confirmed. But before 1 could act, luckily, Withers entered, assisting Cripps, the gardener, whose progress was somewhat impeded by the presence of a kitchen knife in his chest.

“She done it!” he cried, pointing straight at Lady Agatha. “She done in the master and she done me in the same way just before she come in here.”

He was halted by a fit of coughing and then went on. “This house is full of them knives. She’s got a factory in South London as makes ’em. The master wouldn’t give her money, and she started the knife factory to spite him. Lord Windblown found out about it and tonight he accused her of debasing his name and disgracing the peerage by going into trade. So she stabbed him. I seen her do it!” At the conclusion of his lengthy and rather ungrammatical piece of dialogue, Cripps sank to the floor and expired. 1 motioned Bootle to take Lady Agatha into custody.

And so, dear reader, our little fable is ended. Once more the Police Inspector has mucked things up so thoroughly that the truth has tumbled out in spite of his efforts. I am afraid something dreadful will happen to Lady Agatha when she is tried at the next assizes.

As for the Honorable Lavender Mopeland, she received back the thousands of pounds which Lord Windblown had embezzled from her estate. But she had found peace in her simple life and prefers to go on serving the locals at the Hare & Harebells, rather than revert to her proper station as a great lady.

“It’s cozylike, there of an evening,” she says. And that’s the way 1 like to leave a story — cozylike, with everybody happy.